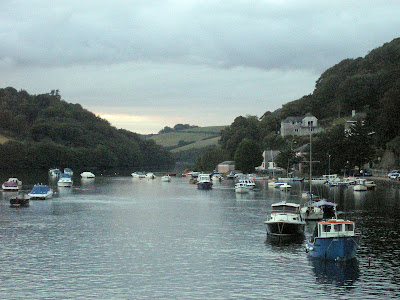 I have not ventured out to the small island off the coast of the Cornish harbour resort of Looe; but I can vouch for the quality of the fish and chips in the town, which we ate by the ice silo as darkness descended. The island is famed for the smuggling exploits that were undertaken by the Hooper family in the late 18th and early 19th century. Island life has changed considerably since then and most of the residents today have four legs or a pair of wings.

A hoard of Roman coins has come to light on Looe Island. Members of Time Team are due to appear in a programme filmed on the island later this year (I believe 1 March is the scheduled date). If you go to my aNobii bookshelf - lower right on this blog - you will find details of a small book, We bought an Island, about two intrepid sisters who gave up their suburban jobs and lives to move to Cornwall with a view to owning the island and starting a pottery. They showed remarkable commitment to their project, encountering storms, boat troubles ... and rats!