We are just back from an eleven hour day at the 5th Festival of Suffolk Poetry. The day began for me with a workshop led by Rebecca Watts in which we were encouraged to make poetry collisions by bringing unlikely situations or characters together. If I say that one of my drafts began with Darwin, Lowry, the Great Fire of London and a horse, you will begin to get the picture...

The Suffolk Poetry Cafes took to the stage in the afternoon along with Creative Writing students from the sixth form college, One.

David and I both read in the Open Mic this year: my poem was inspired by a train ride we made from Philadelphia to New York back in 2012.

The evening included readings by John Vaughan, Beth Soule, Susan Utting, Blake Morrison and Rebecca Watts. Having read Morrison's collection Shingle Street, named after the Suffolk coastal village of the same name some time ago, it was good to hear the poems read in the poet's voice.

Huge thanks to Colin, our Festival Director, and to all the Suffolk Poetry Society committee for their hard work. It was much appreciated by all of us.

Review of 'Towards The Light' in The London Grip 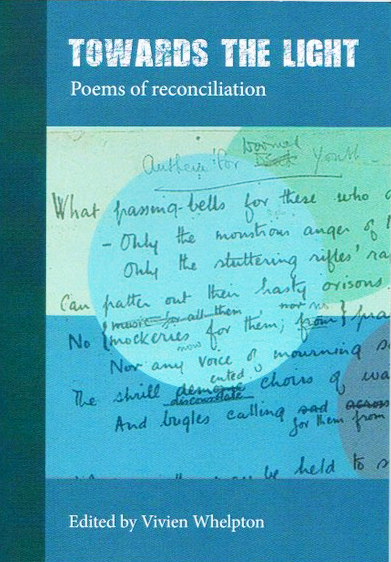 There is a detailed review by Thomas Ovans of Towards the Light over on The London Grip site today. As Ovans mentions, my poem, 'Et in terra pax', concerns the 1914 Christmas Truce. It was inspired in part by the stained glass window in the Chapel at Loretto School.

Posted by Caroline Gill at 23:09 No comments: