The word 'triumph' comes to mind as I begin to look back on the extravaganza of events that have taken place here in Swansea at the Dylan Thomas Theatre and at the Nick Holly Studio Gallery over the last few days.

I would like to offer my sincere thanks to the organisers, Peter Thabit Jones (of The Seventh Quarry, Swansea) in conjunction with Stanley H. Barkan (of Cross-Cultural Communications, New York).

I would also like to thank all those who worked behind the scenes and all those who participated in various ways, enabling us to enjoy poetry, drama, music and dance from many different corners of the globe.

N.B. Some participants had already had to leave by the time this photograph was taken.
Posted by Caroline Gill at 23:27 No comments:


Not the best photo, I'm afraid, as it was taken in the auditorium of the Dylan Thomas Theatre in the dark without a flash, just before the show began. However, it gives a good impression of the wonderful stage set designed (I believe) by Nick Holly for last night's Welsh premiere of 'The Boy and the Lion's Head', the new verse drama by Peter Thabit Jones. It was an amazing enterprise and greatly appreciated by all those who had the privilege of seeing the performance.
Posted by Caroline Gill at 16:29 No comments:

I have just come in from a magnificent day of poetry, dance, acting and music from the USA, Wales, Israel, England, Cornwall, Scotland, Canada and Italy. Tomorrow we will hear poetry in translation, but more of that when the time comes. Old friendships have been renewed and new international friendships have been made. We have heard poems of mourning and poems of jubilation. We have laughed and we have been almost moved to tears. We have heard dialect poetry, and have seen poetry written in many languages in the various books by the participating artists - from Catalan to Korean. Thank you, Stanley (of Cross-Cultural Communications, New York) and Peter (editor of The Seventh Quarry, Swansea), for organising such a remarkably cosmopolitan event. Roll on tomorrow for the next round ...
Posted by Caroline Gill at 00:03 1 comment:


The Swansea International Poetry Festival has begun with a swing! The festival is taking place under the auspices of The Seventh Quarry, Wales (ed. Peter Thabit Jones) and Cross Cultural Communications, New York (ed. Stanley Barkan).

Tonight's launch took place in the Nick Holly Studio Gallery, a superb venue. Thank you to all who made it a wonderful evening. Here's to tomorrow!
Posted by Caroline Gill at 23:04 No comments: 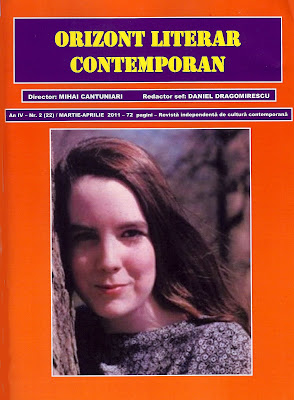 Orizont Literar Contemporan
'All the world in a journal'
Thanks to the stalwart efforts of editor-in-chief, Daniel Dragomirescu, and the editorial team, the latest issue, An. IV, number 2 (22), of Orizont Literar Contemporan has been published - and has now reached me from Bucharest. In keeping with the magazine strapline above, this number contains a literary feast of poetry and prose from many corners of the globe. We find Gonzalo Salesky bringing us his poems from Argentina (p.14), and Professor Donald Riggs sharing the second instalment of his article on the teaching of Creative Writing in universities in Philadelphia (p.52). Catherine Mimano offers the lively perspective of a nineteen year old in terms of the cultural identity of her country, Kenya, a land of the wildebeest migration and hip-hop music.

My knowledge of modern languages is limited, but I always enjoy seeing the translation of a piece of work alongside the original. Adolf P. Shvedchikov writes his poetry in Russian with alternative English versions. Petronela Corobleanu of the translation unit, MTTLC, at the University of Bucharest has provided a Romanian translation, too, and it is fascinating to see the three languages laid out together on the page.

Wales is well represented in this issue. I was particularly delighted to find an appreciation by Byron Beynon of the poet, Raymond Garlick, who died on 19 March 2011. Byron is brilliantly placed to write such a piece, for, as we discover in his tribute, he was the recipient of over 100 letters and cards from this formative Anglo-Welsh poet. You will also find my latest interview, number seven in the 'Dialoguri Galeze' series, with poet and Tuesday Poetry Group leader, Jean Salkilld. Jean's poem, 'Legend's Source' (p.4), takes us 'through lights of autumn leaves' into the northern woods of America, where the tears of Hiawatha's mother supposedly welled up in the form of the mighty Missisippi river. Our thanks to Petronela Corobleanu for her translation into Romanian.

The magazine covers every shade of style and emotion. I will end by alluding to Victor P. Gendrano's piece, 'My Grocery Adventure', on p.34. He demonstrates in three short paragraphs just how he was able to fulfil his daily motto of making 'at least one person smile'. It would be giving the game away if I spilled the beans (no pun intended!) and explained just how he came to do this, for perhaps you would prefer to order a copy of the magazine and find out for yourself ...

Posted by Caroline Gill at 13:44 No comments:

'I went on daily walks, alone, letting the island-like world seep into my very being ...'
Peter Thabit Jones, Preface, p.9
We were delighted to visit the stunning Studio Gallery of Swansea artist, Nick Holly, last Friday for the launch of Poems from a Cabin on Big Sur by Peter Thabit Jones. The work in this sparkling new collection brings us - in the apposite words of Vince Clemente - a vision of Peter, 'the man on Big Sur [observing] with the eyes of maturity, but [feeling] with the open heart of the boy on Kilvey.'

Big Sur, on the Central Coast of California, is adorned with the stunning combination of the St Lucia Mountains and the Pacific Ocean. It is a place well-loved by writers and those who seek natural wonder and solitude. Redwood and Monterey Pine adorn this region. It is an area of wide skies and horizons, where the rugged landscape is frequented not only by mountain lions but also by rare amphibians such as the California Giant Salamander (Dicamptodon ensatus).

In his Preface, Peter alludes to the fact that his spell as Writer-in-Residence in the Cabin on Big Sur followed in the tradition of a line of other writers and artists who had been equally influenced by this extraordinary wilderness (in the sense of 'expanse of wildness' rather than 'area of emptiness'). Jack Kerouac's novel, Big Sur, (1962), for example, arose out of his time in the same cabin.

Many of us dream of living the Robinson Crusoe experience. Most of us occasionally manage to hunt out small corners 'far from the madding crowd'. Writers like Dylan Thomas and R.S. Hawker beavered away in huts perched high above estuary and ocean. I like to write with one eye on the keyboard and the other on the wide sweep of Swansea Bay, as it spreads out beneath my window. Few of us, though, unlike Peter, have truly experienced the life of a poet in isolation - for real.

It is with these thoughts in my head that I plan to approach this collection as I read it more carefully and alongside the accompanying photographs in the days to come. I have already encountered poems that invite the reader to glimpse into the 'window's picture', as it conveys the poet's vision in terms of a dual sense of the 'so-close ocean' and the 'shores of the mind'.