'How like the nimble acrobat he springs
from branch to branch ...'
from BLUE TIT by Bernard M. Jackson, p.25
~
MANY HAPPY RETURNS, TIPS FOR WRITERS MAGAZINE!
2011 marks the 10th anniversary of 'TIPS for Writers', the magazine of Norfolk Poets and Writers, edited by Wendy Webb. I would like to congratulate Wendy on the success of this unique publication. It has gone from strength to strength over the years, reaching out to many new writers with poetic aspirations. Its pages have been graced by the work of more established writers, too - Sophie Hannah and Alison Chisholm, to name but a couple. Bernard M. Jackson and Norman Bissett have been of great assistance: they are the authors of many of the reviews that have appeared in the magazine over the years.

Wendy's competitions have challenged us all. Her new poetry forms, such as the Davidian, the Echotain and the Andropian, have caused us to flex our poetic muscles on numerous occasions. TIPS poets have met with success in national and international competitions: Claire Knight, for example, won the Haiku section in the International Poetry Competition of the New Zealand Poetry Society in 2009. Her Haiku (俳句) have appeared on the prestigious Snapshot Press Haiku calendar.

Many pay to subscribe to Wendy's magazine, which comes out 6x a year and costs £3 an issue. Others prefer to receive the free electronic journal, eTIPS, in their inbox. TIPS, I believe, began as a kind of postal writing circle, appealing particularly to those who - for various reasons - did not find it easy to meet up with other poets. I, for one, have valued this particular ethos, and have made new 'writing friends' as a result.

The latest edition has a crisp kingfisher-blue cover. It contains details of forthcoming competitions in celebration of the anniversary. The poems in this issue are very varied in style and theme. 'The Cell Phone' by Kay Weeks from Maryland is a Sestina. David Norris-Kay's contribution is a Tanka. The Terza Rima and Haiku put in an appearance alongside other crafted poems that have no formal name.

Not surprisingly for a number that comes out in January, several poems have winter themes. Anne Smith's 'Snow' evokes a compelling winter world in ten short lines. Wendy's sparrows 'twitter on bare twigs' ('Winter'), while Bernard's garden visitor 'sings on trembled stems' ('Blue Tit'). Blue is 'my' colour, so I was naturally drawn to 'Still Vibrating Blue' by Roger Elkin, in which he paints that distinctive Adriatic shade for us, in a disconcerting quivering tone, somewhere 'between aquamarine and turquoise'. The poems range in length from the Sestina down to Diana Mendel's three-word nutshell, '3 Rs' (which is part of a sequence).

Wendy's latest book in her 'Mermaid' series is reviewed by Bernard M. Jackson. Wendy interviews fellow editor, Ronnie Goodyer of Indigo Dreams, about his forthcoming anthology, 'Soul Feathers', in aid of Macmillan Cancer Support. You can read more about this project here in a report in The Eastern Evening News.


Happy Birthday, TIPS for Writers - and here's to the next decade!
If you are interested in joining the TIPS community, you might like to find Wendy on Facebook. Do take a look at Wendy's sites:

I had just been enjoying Adam Tilt's wonderful photographs of the moon on his blog, 'My Life Outside', when I moved over to the Contemporary Literary Horizon blog from Bucharest to read Peggy Landsman's 2011 Space Odyssey post ('2011: ANOTHER SPACE ODYSSEY / 2011: ALTĂ ODISEE SPAŢIALĂ'). It is a wonderful cyber-galactic piece - and I felt privileged to have a mention in it. Thank you, Peggy.
Here's to 2011 and the continued success of 'Orizont Literar Contemporan' magazine (linked to the  Contemporary Literary Horizon blog) as it strives to reach new heights and an even wider international - and perhaps extra-terrestrial - readership!
You can read more about the magazine here and here - and you can always use the comment facility on the Contemporary Literary Horizon site, if you feel you have a query or would like to make a response of some kind. The editior-in-chief, Daniel Dragomirescu, is keen to widen the ever-increasing orbit of this international and cultural journal. You might care to visit Kristina Kostaki's blog. Kristina, a contributor to the magazine, lives in Greece. She has written a post about the 'Orizont Literar Contemporan' anthology here. You might also like to zoom off to M. Denise C's blog, here.
Posted by Caroline Gill at 18:46 1 comment:

My thanks to Matt Merritt at Polyolbion for alerting me to the coverage of the prize ceremony on Jane Holland's blog, here. Derek Walcott won the prize with his Faber collection, White Egrets.

In case you have not caught up with the news reports, you can read The Guardian's feature here.


I recall a happy evening at Hay some years ago, when Derek Walcott answered questions and delivered his poetry to a packed auditorium. I was particularly pleased to have bought a copy of his 'Omeros' in the Poetry Bookshop that afternoon.

N.B. My photos are not linked to locations or symbolic representations in the book, but it seemed a good opportunity to appreciate these fine birds! The Egretta alba, the Great White Egret, has black feet and a yellow bill, unlike the Little Egret on one leg in the Divari Lagoon photo.
Posted by Caroline Gill at 18:17 2 comments: Those with Scottish links all over the globe will be celebrating Burns' Night this evening, so it seemed appropriate to join in. The haggis may only be 'virtual', but click here to enjoy it all the same!

Anthology Alert (8): Tiger, Tiger (A project to help the WWF)

Perhaps there is a tiger poem in you, waiting to leap out on to the page. Helen Calcutt, Peter Tinkler and David Calcutt of The Written Image are preparing an illustrated 'Tiger, Tiger' poetry anthology to raise funds for the WWF Save the Tiger appeal.

If you would like to have a submission of tiger poetry or artwork considered for this inspiring project, you will find the submission guidelines here. The final deadline is drawing ever closer!  Everyone is invited to respond to the appeal, whether you are a poet, artist or tiger supporter.

Perhaps you would like to endorse the project by sending a donation to the World Wildlife Fund's campaign to 'save the tiger'. You will find details here (with excellent video clip), and I know The Written Image has a project target of £500. At present, 3200 tigers remain in the wild.

Key Points:
Happy writing! Unleash the tiger . . .
P.S. Members of The Written Image may be familiar to you through their recent anthology, 'Bugged'.
Posted by Caroline Gill at 11:11 1 comment:


I am very grateful to M. Denise for featuring my post on the 'Orizont Literar Contemporan' anthology on her blog. You can click the link here.

The anthology, which includes my poem about Laugharne (in English and also in Romanian, thanks to a translation by Alina-Olimpia Miron), was edited by Daniel Dragomirescu in Bucharest. You can read my original post about it here.


I was writing one of my 'turtle' cards this afternoon when I came across the term, 'Caretta caretta', in the latest issue of The Dawntreader (Indigo Dreams Publishing).

I was delighted when I found this poem, 'The Lost Egg of Caretta caretta', on the web. The ecological forum belongs to the Katelios Group, which concerns itself with sea turtles, the environment and volunteers in Kefalonia (of 'Mandolin' fame).

I thought you might like to take a look at my turtle photo, which graced the card I was writing earlier. The picture was taken a little way round the Peloponnesian coast from Pylos (of Homeric fame). The strange thing is that I was pretty convinced that the Caretta caretta sea turtle had eluded us on our week-long Greek Odyssey. . . until I uploaded the photo above on our return to Wales. 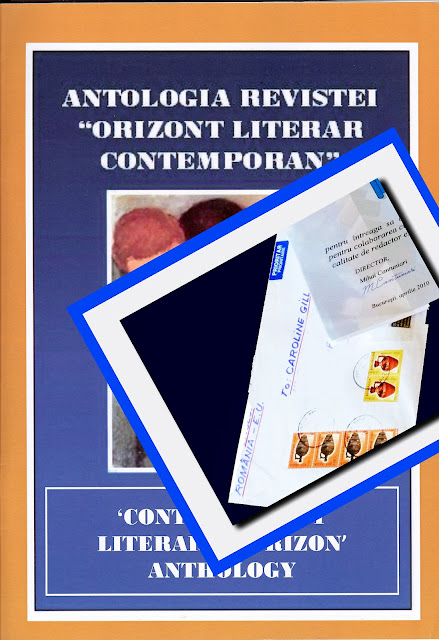 Here's to 2011 and the continued success of 'Orizont Literar Contemporan' as it strives to reach new heights and an even wider international readership.
You can read more about the magazine here and here - and you can always leave a comment on the Contemporary Horizon site, if you feel you have a comment or query or would like to make a response of some kind. You might also like to visit Kristina Kostaki's blog. Kristina, a contributor to the magazine, lives in Greece. She has written a post about the Anthology here. You might also like to visit M. Denise C's blog, here.
Posted by Caroline Gill at 14:49 3 comments: