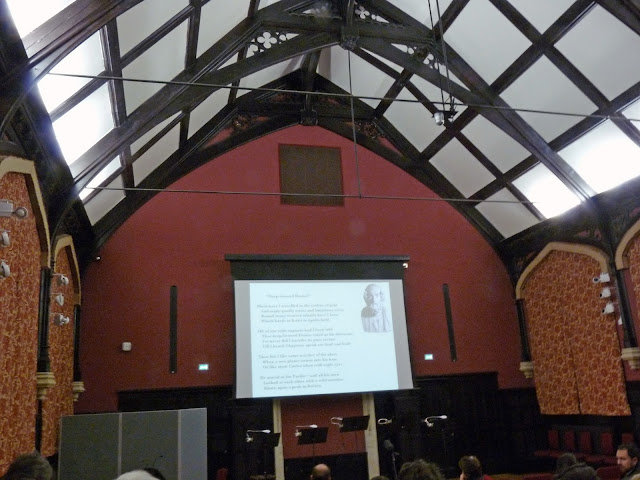 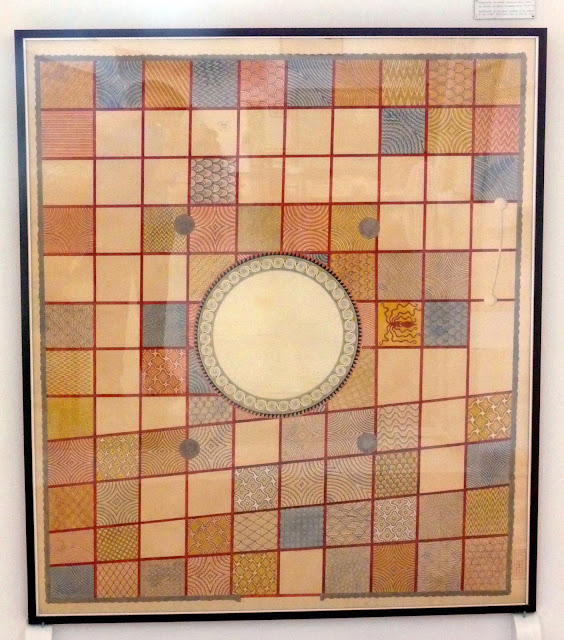 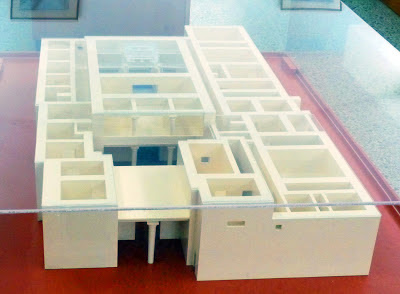 Posted by Caroline Gill at 23:31 No comments:

I heard a riveting talk and poetry reading at UCS in Ipwich today. The presentation was given by Caroline Gilfillan, who has recently launched her poetry collection, Pepys, a work inspired by the famous diary.

Caroline Gilfillan’s poetry pamphlet, Yes, won the East Anglian Award for poetry in 2010. Caroline won the George Crabbe poetry competition in 2012 and the Jarrold’s Prize for the best poem by a Norfolk writer in 2007. Her poetry and fiction have been published in many magazines, including Mslexia and The London Magazine.

I visited Tate Modern for the first time recently, via the Thames Clipper from Greenwich. I took this view from the gallery, which is a converted power station. Later in the day we walked over the Thames on this bridge to St Paul's. Caroline reminded us just how different everything would have been in Pepys' day, with the devastation of the Great Fire of London ... and surgery without modern anaesthesia!

And for those who would also like to read an account of Pepys in prose, Caroline recommended Samuel Pepys: the Unequalled Self by Claire Tomalin.

Do look out for Caroline's poetry collection, published by Hawthorn Press.

STOP PRESS: I have just heard from Caroline, who adds ...

"People can buy Pepys by emailing me directly from here or via my website: www.carolinegilfillan.co.uk where they can also read some of my poems. Thanks!"
Posted by Caroline Gill at 09:55 No comments:

I am delighted to have a poem, 'The Ceilidh House', up on Joanna Ezekiel's site, my delayed reactions, in her poetry snapshots series (update: it seems this is no longer online - March 2015). Many readers of my blog will know by now that Skye holds a special place in my heart. The Clearances, however, were often brutal and devastating.

Poetry Publication: The Gift of Form by John Brantingham


John Brantingham, US author of The Gift of Form: A Pocket Guide to Formal Poetry, published by Oak Tree Press, has also written poetry collections such as East of Los Angeles. His poetry has been featured on Garrison Keillor's Writer's Almanac and in hundreds of magazines in the US and the UK. He has been nominated for multiple Pushcart Prizes and won Pearl Magazine's Fiction contest. He lives and works in Southern California.

John, who did not start out as a fan of formal poetry, writes in his introduction,


'... and then I made my largest intellectual shift:
the rules of formal poetry are not there to be restrictions,
and in fact there are not really any rules at all ... '

Rules for John have been replaced by tools.

I met John back in 2011 at the First International Swansea Poetry Festival in the Dylan Thomas Theatre, organised by Peter Thabit Jones (ed. The Seventh Quarry, Swansea) in conjunction with Stanley H. Barkan (Cross-Cultural Communications, New York). The photo above was taken during the festival, and shows the backdrop to Peter Thabit Jones' acclaimed verse drama, set in Swansea, 'The Boy and the Lion's Head'.

I am delighted to have two poems, 'Cornish Evening' and 'Waiting for the Bore', included in The Gift of Form: A Pocket Guide to Formal Poetry.

Posted by Caroline Gill at 18:03 No comments:


Saturday (tomorrow) is National Libraries Day, and Mai, leader of the Ipswich Writing Group, has been mounting a display of our creative writing in Gainsborough Community Library in Ipswich, where we meet. This popular library serves as a hub for those who live in the area and for those who come from further afield. 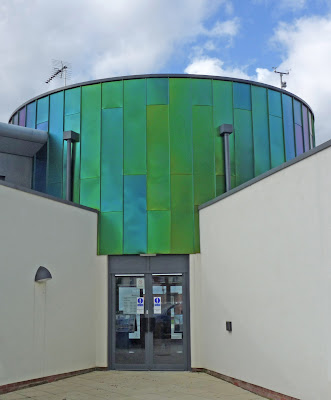 There are friendly members of staff on hand - and a very popular cafe. There is also a good section of large print books.

The Writing Group has been going since last summer. Members have enjoyed input (from Mai and other members) on novel-writing, journalism, poetry and screen-writing. We also spent a session on Shakespeare, reading excerpts from Romeo and Juliet.

We were looking at novel-planning yesterday, and were able to make good use of the books in the library. I selected a novel called The Poet's Wife by Gillian Allnutt. It is about Patty, wife of the poet, John Clare - and is a book that I will add to my GoodReads shelf in due course.

You might like to read my poem, Ode to our Treasure Keepers, in support of Newcastle libraries here. You can read about the background to the Newcastle library campaign here.

Let's celebrate and cherish our libraries, particularly in these difficult times ... and if you have a project for the National Libraries Day, you can Tweet it, using this tag: #NLD13.
Posted by Caroline Gill at 10:42 No comments:

Many of you will know that I am a supporter of - and external collaborator for - the international journal, Orizont Literar Contemporan from Romania. The Romanian team members work extremely hard to produce publications reflecting the diverse views of writers of all kinds (novelists, journalists, poets ...) from all over the world. This makes for a fascinating read and offers a multicultural perspective on life in general and on the international literary scene in particular.

There has been a flurry of new publications in recent months, beginning with the issue of the journal (top right, showing Edinburgh Castle), An V - Nr. 5 (31), which includes a feature by Scottish-based poet, Neil Leadbeater, on 'A Dizzen Scottish' poets. Eileen Carney Hulme, known to Indigo Dreams poets, is represented as one of the twelve, along with Kenneth Steven, known for his poems of the wonderful island of Iona. I enjoyed Eleanor Livingstone's report on StAnza, Scotland's international poetry festival. This issue also contains poetry from the Dominican Republic (Marielys Duluc Reyna), Brazil (Andreia Franco), Italy (Claudio Sottocornola) and the USA (Daniel Montoly), to cite but a few.

This journal was swiftly followed by An V - Nr 6 (32), which includes not only the work of Mexican poets, but also a prose piece, 'A Letter about Mexico' from Mira Faraday in the USA. I would particularly like to see the phenomenon of the mountain-top butterfly migration that Mira evokes, the more so since I was spellbound by the coverage of something similar in Sir David Attenborough's recent BBC natural history programmes on Africa. This issue also includes a selection of poetry by Anne Stewart, who will be known to many of the British poets. Her poem, 'Take my Hand', particularly appealed to me.

This brings me to the new book!

Orizontale Interculturale (ISBN 978-606-13-1174-3) by Daniel Dragomirescu is a remarkable record of the early years in the life of this multicultural literary magazine. It charts the hopes and dreams alongside some of the challenges that faced the small team of dedicated enthusiasts in the early days of the project. In one sense the smiling faces of Equipo Dragomirescu say it all, in the delightful cover painting by Virginia Patrone from Spanish Uruguay for Orizont Literar Contemporan has come of age!

The Director, Mihai Cantuiari, pays tribute in his Preface to Daniel's vision, noting that Daniel's 'youthful dream' for an independent international literary magazine finally came to fruition in 2008. There is certainly cause for much celebration in 2013. The magazine has found its way into numerous corners of the globe. It continues to draw more supporters via its presence on the web and by word of mouth. The Director's Preface is followed by a Romanian translation of Daniel's Cosmic Suitcase, a witty and charming tribute by Peggy Landsman (USA), a loyal supporter from the outset.

The book is largely in Romanian. It also contains articles and chapters in English. These include the paper that constitutes the final chapter of the book, From Creative Localism to Interculturalism, and a transcript of the interview conducted by Luis Benitez with Daniel, entitled All the World in a Journal.

So ... in the words of Daniel Dragomirescu,


'We're offering our readers pieces of literature
written in languages of international circulation,
and our efforts appeal to them ...
CLH  (i.e. Orizont Literar Contemporan) aims to become
an ambassador of friendship and cultural dialogue
between all the people in the world.'