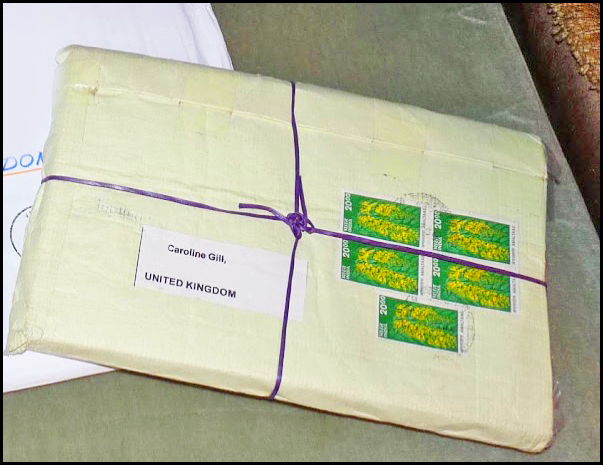 The image above shows a previous package from India, but a similar one (practically identical but with different stamps) arrived yesterday, containing a contributor's copy of the Golden Jubilee issue of Metverse Muse, an international poetry journal edited by Dr. H. Tulsi. It is always a joy to read poems from different parts of the world and to feel connected in this way. Most issues have offered a Fixed Form challenge: the last one was for a Burns Stanza, a form of Scottish origin, and the new challenge is for a Terza Rima, a form that developed in Italy.
And this, for me, is one of the joys of poetry, that there are countless influences, methods, techniques and forms (see here for example: I contributed three poems to this Handbook from Lewis Putnam Turco in the USA), spanning not only the centuries but also the globe.
There is much talk in the present climate about letting down the proverbial portcullis, but poetry enables us to see new vistas through the eyes of another. It encourages us to lower the drawbridge instead, allowing literary influences to flow and circulate. I feel this is particularly important at the present time.
Back in the days when the internet was considered a fledgling phenomenon, I remember starting out one year with a fresh goal. I wanted to have a poem published in an international journal. Since then I have had the privilege of collaborating, albeit mostly in small ways, with poets and editors in Romania, Australia, the Netherlands, USA, Italy and Slovenia, to name but a selection of countries. Most collaborations or communications have been via the internet, but occasionally I have had the privilege of enjoying a face-to-face meeting.
One such occasion was the launch of the chapbook I co-authored with North American poet, John Dotson. It was arranged by our publisher, Peter Thabit Jones of The Seventh Quarry, at the Dylan Thomas Birthplace, 5 Cwmdonkin Drive, in Swansea. John was over from the USA, and we were able to read our poems together.

Another of my multicultural forays in the name of poetry occurred when I was invited to conduct an interview in Philadelphia with Donald Riggs, Teaching Professor of English from Drexel University for Orizont Literar Contemporan, Daniel Dragomirescu's international literary journal from Romania. While I was in Philadelphia, I was also able to spend a day with fellow poet, Kay Weeks. We have collaborated on one or two poetry and art projects, including a charity one, Blossoms of Hope.

A year ago Jongo Park, a visual artist from Seoul, South Korea, supplied a painting of a mermaid as a poetry prompt for me. The paired picture and poem were published in an eBook anthology produced by Italian poet, Lidia Chiarelli of Immagine&Poesia, alongside 94 other contributions from 5 continents and 35 countries. You can download this free eBook (Volume 4) from this site.
In these uncertain times, it seems particularly important to celebrate our global community of poets and the immense joie de vivre that this ancient art can bring to the modern world.
And if you are wondering why the top photo is not of the actual parcel that arrived yesterday, well, in my haste to preserve the Indian stamps for the work of TLM (The Leprosy Mission), I made rather a mess of the packaging!
Posted by Caroline Gill at 11:24 No comments:

'Towards the light', a new poetry anthology on 'reconciliation' 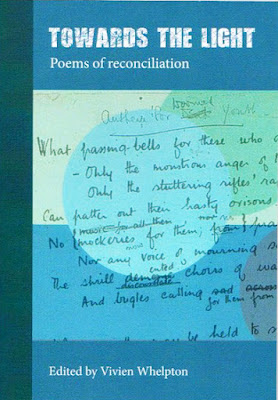 There are a number of artistic projects commemorating the end of the First World War, and this book, Towards the light, represents one that is particularly close to my heart.

Pam Job and Judith Wolton embarked on a poetry enterprise that would lead to the production of two anthologies, one on conflict (so too have the doves gone) at the beginning of the commemorative period, and now this one on reconciliation to mark the end of the hostilities.

Sadly the snow meant that a number of us had to miss the launch at the Essex Book Festival, but there will be other events as the year goes by.

Poets who had been involved in the initial anthology project were invited to submit work for the second. Editor, Vivien Whelpton, selected my acrostic poem, 'Et in terra pax', about the surreal yet hopeful time when strains of 'Adeste fidelis' rang out across No Man's Land.

The new anthology, published by Kapaju Books (2018), sports a cover design by Karen Dennison. It includes a Preface by the editor, who writes that...

'Vivid metaphors bring home to us both the pain and difficulty of reconciliation and the joy it brings...'

Posted by Caroline Gill at 15:03 No comments: