The new issue, as ever, is packed with inviting reading material. There is a good mix of poetry and prose, along with some original artwork. The magazine hails from Swansea and features work from most corners of the globe. This issue alone contains submissions from Wales, England. Ireland, France, India, Serbia, Germany, Belrus and America.

Russian-born poet and photographer, Aleksey Dayen, is remembered and honoured. He died in New York last November. I had the privilege of meeting Aleksey when he was reading at the Dylan Thomas Centre in 2009. I particularly recall his highly individual reading of 'Jailbird Blues', accompanied by singer-songwriter, Terry Clarke. Multi-faceted artist, John Dotson from the USA, provides a fitting tribute to Aleksey in the form of a poem, 'The Full Moon Rose'.

The initial interview with John Dotson concerns his work in the realms of poetry, drama, biography, sculpture, painting and acting. He describes the impact of the environment on his outlook from a place where 'the Pacific tides sound through' his dreams. He speaks of his encounters in the landscapes of Dylan Thomas on both sides of the Atlantic, and of his forthcoming book, Love for Ever Meridian.

The poems in this issue represent an eclectic blend of styles. They range (in shape as much as style) from Alan Perry's Thin Poem, 'Line', to 'A Once Strange Face' by Mike Jenkins, which moves the eye in several directions back and forth across the page as it stalks towards its climax. 'Legend's Source' by Jean Salkilld evokes an enchanted landscape, as we wander in the footsteps of Hiawatha's daughter. The final poem in the issue, 'Song' by Frances Sackett, transports the reader to an area of mountainous terrain in which there are 'things you recognise' followed by the unknown call of a mysterious bird . . .

I was very struck by the winning poems in the (USA-based) Left Coast Eisteddfod Poetry Competition (2010), judged by Peter Thabit Jones. The winning poem, 'Iberia' by Bruce Lader, dares the reader to follow in the hoofprints of Don Quixote, as he canters through the landscape of Spain in a Golden Age. Jolen Whitworth was the runner-up with a modern Sonnet, 'He Paints'.

Other features in this issue include the following:
And finally . . . an exciting announcement: 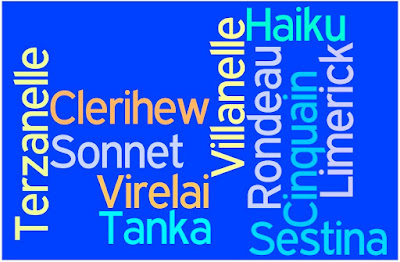 I was interested to read on the 'Poetics and Ruminations' blog that the forthcoming edition of The Book of Forms ('A Handbook of Poetics' compiled and edited by Professor Lewis Turco) will be available on Kindle. The updated work will also be published in book form.

Meanwhile, the current edition of 'The Book of Forms' is available here. I have owned a copy for many years and have found it a fascinating and invaluable guide.
Posted by Caroline Gill at 21:50 No comments: 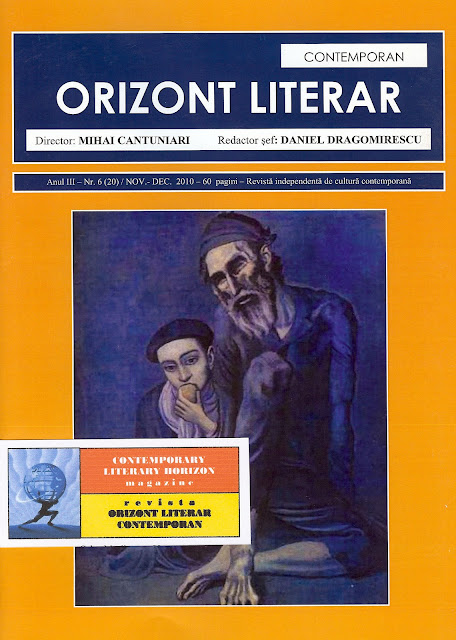 Congratulations to editor-in-chief, Daniel Dragomirescu, in Bucharest for bringing out the latest edition of 'Orizont Literar Comtemporan' / 'Contemporary Literary Horizon' so speedily after the recent 'Antologia'.

Atlas may struggle to bear the weight of the world on his shoulders (on the red and yellow card in front of the magazine), but the world of 'Orizont Literar Comtemporan' is a welcoming, buoyant and cosmopolitan cosmos of its own that propels its reader into new realms of art, literature and the vibrant exchange of ideas. The undergirding of Atlas, however, reminds us that there is a sense in which the reader finds him or herself peering forward towards ever widening horizons, 'standing on the shoulders' of those literary giants who have begun to pave the way.

The issue opens with USA writer, Peggy Landsman's witty piece, 'Daniel's Cosmic Suitcase', about the magazine's editor, who reaches for the stars. I have alluded to this in a previous post. Some features are more earth-bound, such as 'All Things Mothering' by Terra Trevor (USA), subtitled, 'Braiding Native American Heritage Month with Thanksgiving: A Native American Mother's Perspective'. This account begins with an evocative opening:


'Wind, smelling of woodsmoke, rattles the yellow leaves off the peach tree ...'
But all has not always been well in the garden, for Katerina Kostaki's poem (in Greek with English translation) is about 'The Apple of Discord'.
The magazine features a substantial excerpt from Daniel Dragomirescu's novel, 'Cronica Teodoreştilor / Chronicle of a Lost World'. Thanks to the translation by Loredana Andreea Matei, a second year student on the MTTLC course at the University of Bucharest, I am able to enjoy the narrative, 'Chained by Law', about Stelian Teodoescu, 'a former inspector of the Cooperation Institute' who
'headed backwards to the other side of the yard,
where a barn was under construction,
filled with memories...'
Carole St-Aubin takes us back (or moves us forward) to Christmas - in the kitchen 'where love is the ingredient in every feast'. Khem Guragain from Nepal adds an oriental flavour with his book review of an autobiographical novel, 'The English Teacher' by N.K. Narayan. The protagonist, apparently, experiences an understandable sense of bitterness when he finds that he is required to 'stuff the students' at Albert Mission College' with Shakespeare, Milton and Carlyle. (Aside: I would very much hope that Shakespeare and Milton would feature on the school syllabus in England today, but I would be pleasantly surprised to find a mention of Carlyle!).
The thought-provoking poetry of Roxana Drăguşin has a wistful philosophical air about it in places. Roxana has provided her own translation in English, and I was particularly struck by this phrase from 'Călătorii' / 'Travellers':

'We pick up smiles, flowers, butterflies ...'
Wales is not forgotten! My interview with Gillian Drake explores the realm of writing for children and adults in terms of the joys and responsibilities of creating 'another world' or bringing to light 'another dimension of this one'. My sincere thanks to Gillian for being in the 'Dialoguri Galeze' spotlight on this occasion.


* * *
If you would like to take out a subscription to the magazine, you will find details below:
Recent contributors:
Posted by Caroline Gill at 12:21 No comments:

Window on Wales (4): Castles in the Frame


I have just been enjoying the photo gallery of castles in Wales on the BBC Wales site here. If you have photos that you would like to submit, you will find the details on the site.

I wonder how many castles you think there are here in Wales! I knew there were a lot, but I had no idea that there were this many, with about 100 'still standing'.

It made me wonder how many of these have either featured in poems or provided inspiration for poets over the years. Speaking personally, I don't have to think very hard to name a few castles (e.g. Carreg Cennen, Tretower, Dryslwyn and Manorbier) that have influenced my own writing to one degree or another over the years.

Incidentally, you might like to see the wildlife I have seen recently as part of The Tree Year project (see side bar) in the vicinity of the castle at Dryslwyn.
Posted by Caroline Gill at 14:34 1 comment: