I have already mentioned Locked Down, the new Poetry Space anthology, edited and produced by Susan Jane Sims. I have a poem in the book, and 'attended' the first online launch yesterday evening. It was good to spend a thought-provoking couple of hours in the company of others who had also submitted work arising out of the pandemic. Thank you, Sue, for the evening and for the chance to read.

Yesterday's reading made me want to look out a couple of old photos linked to memories that had fed into my writing. The poem I submitted, a villanelle (which I used as the form lends itself to emphasis), is called 'Wildfire', and attempts to present something of the horror that lay before the eyes of the Younger Pliny in 79AD. I will leave you to draw your own metaphorical conclusions in terms of its relevance to our situation today.

Back in February 1986  David, my archeologist husband, and I were living in the British School at Rome. David's research took him south to Sicily, and I was able to accompany him on this expedition. Naples was our first stop. Rome had been caught somewhat off-guard by an unusual second winter of significant snowfall; as we left the city, snowploughs were being dusted down, ready for use. We were glad to be heading for warmer climes.

Naples, however, was excruciatingly cold. I had not expected to find Vesuvius coated in snow; you can just about make it out behind the statue at the back of the left photo. By the time we set foot on Sicily a couple of days later, the sun was shining brightly on Mount Etna. We shed our jackets, hats, scarves and jumpers and were soon enjoying gifts of elephantine oranges, dripping with juice.

Something felt odd, though; I could not quite believe how cold the Naples area had been. I had always associated Pompeii, Herculaneum and the places around Vesuvius with heat, intense heat, and burning volcanic ash. And of course, I had been round the sites, witnessing the deadly effect that these sweltering and suffocating forces of nature had inflicted on the people and their dogs, as shown in my second photo. Perhaps this sense of 'oddness' or 'other-worldliness' is what triggered the poem.

Do consider buying a copy of Locked Down. It contains 'poems, diary extracts and art' and bears witness to the extraordinary events of 2020. The anthology is being sold in aid of Dr Mark Sims' fund for Cancer Research UK. 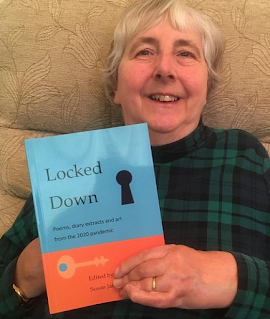 Posted by Caroline Gill at 15:50 No comments:

I am looking forward to reading at the online launch (Tuesday 30th March, 7.30pm) of the Locked Down anthology, published by Susan J. Sims of Poetry Space Ltd. The event is free but donations afterwards to Dr Mark Sim’s fund for Cancer Research UK will be very welcome on this Just Giving page.

I have just heard that three of my short 'endangered species' poems, including one about the Linnet, will be published in a booklet produced by Suffolk Poetry Society as part of a collaboration with The Lettering Arts Trust, who will be holding an exhibition in July called On a Knife Edge - Nature in Peril UK.

Posted by Caroline Gill at 21:48 No comments: