A new book, Rivers of Britain Estuaries, Tideways, Havens, Lochs, Firths and Kyles by Stuart Fisher, has just been published by Adlard Coles Nautical, an imprint of Bloomsbury Publishing Plc. A quotation from my sonnet, 'Egret on the Loughor Estuary', appears as an epigraph in chapter 8 on the River Loughor.

The photograph above was taken when we lived in Swansea and spent happy hours with our cameras and binoculars at the Llanelli Wildfowl and Wetlands Centre.

Rivers of Britain is a beautifully produced volume, packed with glossy photographs of Britain's best known tidal, picturesque and industrial rivers. Small waterways are not forgotten. Stuart Fisher, editor of Canoeist magazine, is extremely well qualified when it comes to writing on this topic. He even undertook some of his research from the vantage point of his kayak.

Most of the 70 chapters begin with a few lines of geographically topical poetry. These chapters are illustrated with an array of fine photographs, not only of the waterways but also of topical postage stamps and book covers (John Buchan Society member that I am, I was particularly pleased to spot The Thirty-Nine Steps on the pages relating to the Firth of Tay). There are wildlife pictures like the urban fox on p.84 and the young seal on p.149. Each river is described in detail. Maps are provided along with brown sidebars of factual information, such as the length of a given watercourse, its OS location and nearest rescue services.

I was particularly pleased to find quality photographs of familiar haunts such as St Benet's Abbey, the King Harry Ferry, the nymph and dolphin mosaic from Fishbourne and the Chanonry Point Lighthouse, to name but a few. I wonder which of the featured places are favourites of yours, when it comes to 'messing about on the river' ...

Posted by Caroline Gill at 22:39 No comments:

I am much looking forward to the publication of the second Antologia produced by Daniel Dragomirescu, editior-in-chief of Orizont Literar Contemporan (Contemporary Literary Horizon) magazine from Bucharest, Romania. The international list of contributors is up on the OLC/CLH site here, and you will see that they represent places as far apart geographically as Argentina and Nigeria, Japan and Canada - not forgetting India and Italy. Two of my poems have been included.
Posted by Caroline Gill at 23:12 No comments: 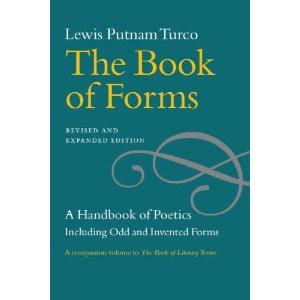 Professor Lewis Turco's work, The Book of Forms, is now available in its 4th Edition, published by the University Press of New England. This new 'revised and expanded edition' has as its subtitle, A Handbook of Poetics Including Odd and Invented Forms.

A copy of the third edition (published in 2000) has long been my constant poetry companion. I have learned so much about what Professor Turco calls 'the elements of poetry', comprising 'levels of language usage'. I have been fascinated by the plethora of covered forms, from one line adonics to 210 lined sonnets redoubled.

The latest edition contains all these features plus added extras in the guise of 'odd and invented forms'. If I home in on British contributions for a moment, you will find a description of Dr Marc Latham's Folding Mirror Poetry, with an example by Claire Knight and a second one by yours truly. Crossing the Severn and moving on into Wales, you will discover a most inventive, if somewhat discordant, form called The Clang, developed by Llewelyn Hugh Nicholas of Swansea's 'Tuesday Poetry' group. If this form reminds me of anything, I suppose it would be the poem, 'Denial' by George Herbert, but this is just a personal hunch. I can vouch for the fact that The Clang is a fun form to try.

Lewis Putnam Turco is an emeritus professor of English. He was the founding director of the Cleveland State University Poetry Center and of the Department of Creative Writing at the State University of New York College at Oswega. The new edition, with sample poems by established names like Robert Frost and newer names like Greg Pincus, can be purchased from UPNE: the details can be found here. You can read the reviews on Amazon here.

In these days when 'form' in poetry is not always a prized word, I find it encouraging to know that there is popular global demand for clear explanations about the numerous different styles of poetry. We owe a huge debt of gratitude to writer-editors like Professsor Turco, not forgetting movements such as Dr. H. Tulsi's 'World Renaissance for Classical Poetry', which was founded in Visakhapatnam, India. Many of us enjoy the challenge of experimenting with word and structure.

In drawing these thoughts to a close, I would also wish to express my thanks to those who create these new forms for us to enjoy. For after all ...


"It can be argued that to invent a verse-form which becomes immortal,
living on in the works of future poets and in other languages,
is one of the greatest achievements possible for a poet ..."
Martin Lyon, 'Acumen', issue 71 (Sept 2011), p.71

For reference
See also:
Posted by Caroline Gill at 22:16 8 comments:


I was delighted to receive the first 2012 edition of Orizont Literar Contemporan from editor-in-chief, Daniel Dragomirescu from Bucharest, Romania. This special issue celebrates the work of twelve poets from the Canary Islands, namely . . .


I am particularly grateful, too, for the smart certificate. Thank you to Daniel and all who work hard behind the scenes in Bucharest. May 2012 be a great multicultural year for the magazine.
Posted by Caroline Gill at 14:51 No comments:


I wonder what global warming means to ME, to YOU?

Perhaps, like me, you have recently been mesmerised by the stunning images and stirred by the alarming commentary in the recent BBC series, 'Frozen Planet'. I see there is still a programme of highlights to come.

Living metres from the water and having had a telephone call about a particularly high tide from the Environment Agency in the last fortnight, I have had cause to ponder this question once again. If you write poetry in English or Welsh, you may like to enter the Awel Aman Tawe Poetry Competition for 2012 on (you guessed) . . .

Details of the anthology from last year's Awel Aman Tawe competition can be found here.
Posted by Caroline Gill at 15:39 No comments: