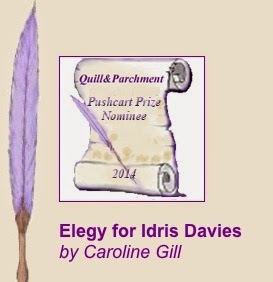 Sharmagne Leland-St. John and her team at Quill and Parchment (USA) have selected my poem, 'Elegy for Idris Davies', for a 2014 Pushcart Prize nomination.

The poem concerns the miner-turned-poet, Idris Davies, from the Rhymney Valley in South Wales.

I have just been sent a link to the Results Page of the 2014 ZSL Poetry Competition on 'Conservation' ...

My poem is about the plight of the Fen Raft Spider.

'They shall grow not old ...'
from 'For the Fallen' by Laurence Binyon

Many will have seen the poppy installation at the Tower of London. David and I attended a fascinating event in honour of (Robert) Laurence Binyon (1869–1943) at the British Museum on 11 November 2014. Binyon's granddaughter, Sophie Gray, assisted a member of staff from Prints and Drawings with the delivery of a presentation about the War Poet's life and work.
Binyon, who was immensely interested in art from Europe, China and Japan, was invited to head up the new Department of Oriental Prints and Drawings in the British Museum in 1913, just before the outbreak of war. His career at the British Museum spanned 44 years.
Binyon was too old to enlist as a soldier in the Great War, but was keen to serve and volunteered with the Red Cross as an Orderly. He became a stretcher bearer.
Basil Gray, Binyon's son-in-law, took over his British Museum work. The new Department of Oriental Antiquities was created in 1933.
We were able to listen to a recording of Binyon's voice and to see documents in the poet's hand, along with prints and watercolours that he had acquired for the Print Room. Two portraits of Binyon by William Strang were on display.

Posted by Caroline Gill at 13:22 No comments:


A sweep of unpromising grey cloud dissipated around noon and the sky brightened over Snape and Aldeburgh. The 26th Aldeburgh Poetry Festival took off in Suffolk sunshine to the delight of those who had come from far and wide to take part, to be informed or entertained and simply to imbibe poetry of all sorts and descriptions.

I made my way to the front at Aldeburgh to sniff the sea and to take my festival photograph near the iconic Scallop on the beach. It was soon time to head off to The Red House for a workshop led by Karen McCarthy Woolf. What an experience to write in such a distinguished and musical venue! Karen kept us on our toes, as urban, coastal and rural horizons began to dance before our eyes. We tried to capture something special in our writing as we cast our nets widely. Most of us came away with pages of material and poems in draft. Thank you, Karen, for such a stimulating, eye-opening and wide-ranging session.


The Aldeburgh Poetry Festival is largely based around the complex of Snape Maltings, with its boardwalk at the edge of the reeds and its wide skies that provide wonderful starling murmurations on autumn evenings. I attended the Open Workshop on Saturday in the Oyster Bar, led by Michael Laskey, founder of the Aldeburgh Poetry Festival, and Jeni Smith, and once again found every poetic muscle in my body (or brain?) being contorted in new and occasionally uncomfortable ways!

Sadly the event with Jen Hadfield was cancelled due to bad weather up north, but it was great to catch up with a good number of friends and to meet new ones. By the time I headed for home my book bag was bulging with a mix of shiny and secondhand volumes and pamphlets by Edward Thomas, Tony Harrison, Karen McCarthy Woolf*, Chrissie Williams, Jen Hadfield and Kevin Crossley-Holland ...

Posted by Caroline Gill at 13:33 No comments: 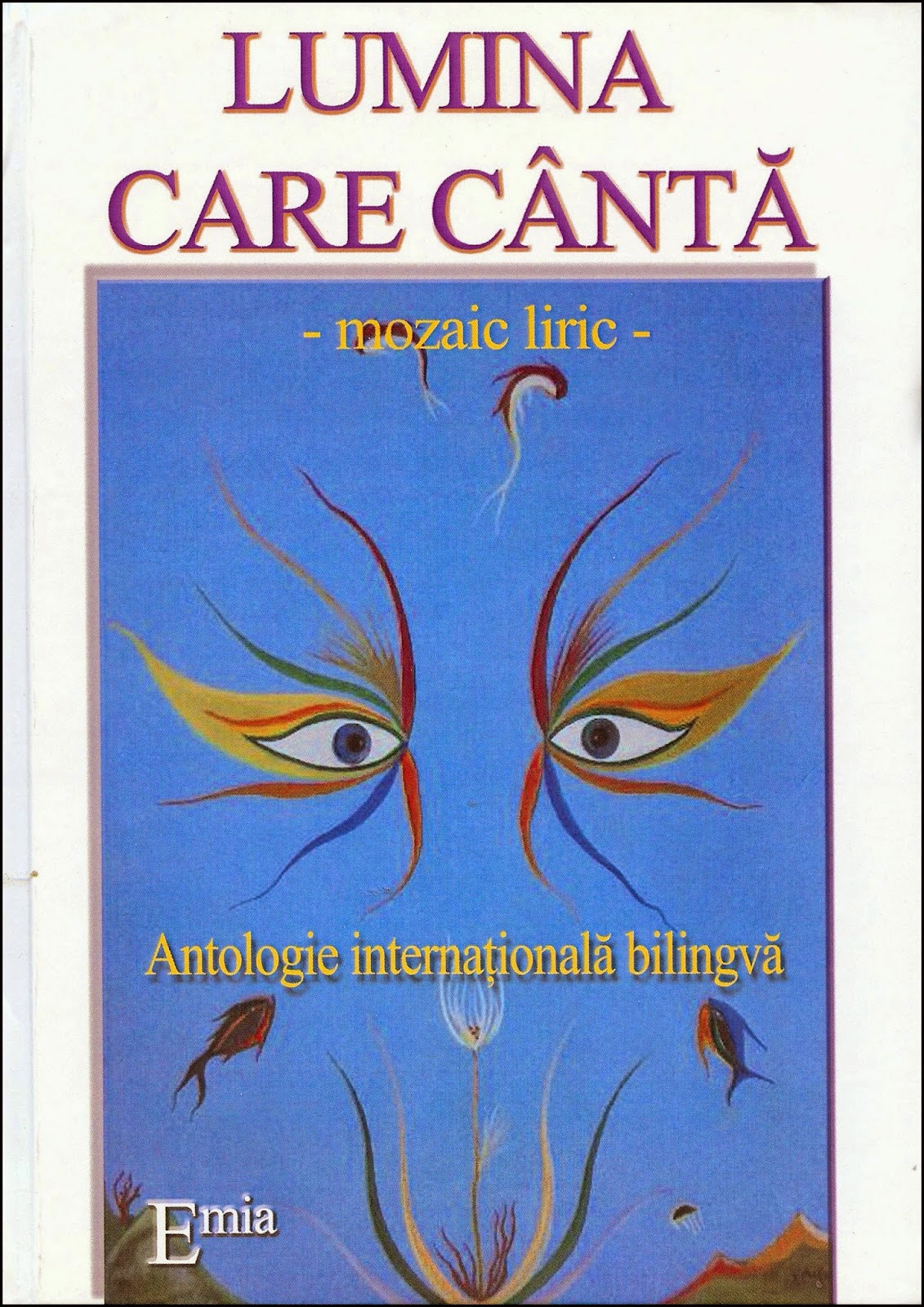 This 'eye-catching' international anthology arrived through my letterbox this morning from Romania. The book is bilingual, beginning at one end with pieces and translations in Romanian and at the other with texts in English.

The English title is The Light Singing, with lyrical mosaic as a subtitle. The editors are Olimpia Iacob and Jim Kacian. The cover image is entitled 'Floating Eyes' and is by Italian artist, Gianpiero Actis. The book has been published by Emia in Romania.

Peter Thabit Jones, editor of The Seventh Quarry, has written the dedication to Aeronwy Thomas (1943-2009), and the anthology begins with three Haiku by Aeronwy, written in response to the cover artwork.

The anthology contains my Valentine Day Haiku, which appears in English (one end of the book) and in Romanian (the other), thanks to the work of Olimpia Iacob.

Posted by Caroline Gill at 23:10 No comments: