After a relatively quiet spell on the poetry front, a couple of things came at once.

I was delighted to have three poems published in English and Romanian in issue 52 of Orizont Literar Contemporan. The poems in question were a Tritina called 'Isle of Skye: Aquiline Encounter' (1/2010), an On-ce poem called 'Pompeii; a Tale of Two Dogs' (14/2010), and finally, 'Migration Mirage' (6/2005), which was first published in The Seventh Quarry. My thanks to editor-in-chief, Daniel Dragomirescu, and translator, Florian D. Mirea. 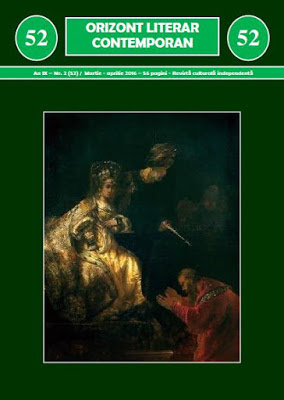 The 3rd Festival of Suffolk Poetry

David and I were invited to read for Arlington's Poetry Cafe in Ipswich (photos here and Festival Report by Deborah Wargate here). I decided to focus on poems inspired by other writers, so my set comprised the following pieces: 'Monte Testaccio: Mound of Potsherds' (53/2003), with its references to Keats, 'On Emily's Moor' (13/2004), about the landscape portrayed in Wuthering Heights - and finally 'Pepys Island' (12/2014), concerning a phantom area of land, supposedly at latitude of 47º south.  My first poem, 'Monte Testaccio ...' comes from my chapbook, The Holy Place, co-authored with John Dotson and published by The Seventh Quarry (Swansea) in conjunction with Cross-Cultural Communications (New York). 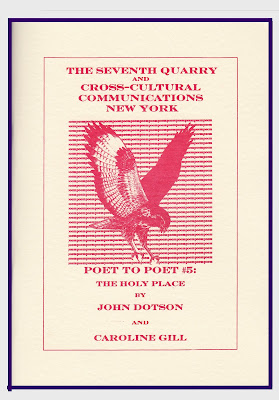 Posted by Caroline Gill at 13:27 No comments: