Todd Swift on the friendship between poets 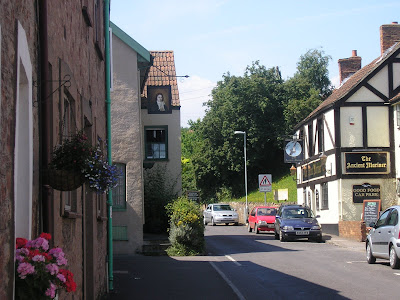 One tends to think of poets as lonely souls who wander cloud-like through life's ethereal by-ways. Swift, however, reminds us of the very real and beneficial friendships that have bolstered so much of our literary heritage. We think of the poetically symbiotic relationships between Keats and Shelley, Wordsworth and Coleridge, Edward Thomas and Robert Frost - to name but three.

Swift's point in writing was, I feel, to explore the nature of poetic relationships in these days of nepotism in the world of publication. Politics aside, I know that I have benefited greatly from the tutelage of others and from the community of 'poets who blog'. I thought Swift's post was a good reminder of the help that we can be to one another as we pursue our passion to write.
Posted by Caroline Gill at 21:43 2 comments:

When a (bucket and) spade is not a spade

Left: snow white on pecan pie or Little Egret in the Loughor Estuary?

Unlike fellow blogger and poet, Mistlethrush, home decorating is definitely not my scene. That's not to say, however, that I take no interest in material swatches or paint cards. In the course of my craft class work, I have greatly enjoyed looking at and developing colour schemes for particular projects. I was intrigued, therefore, by an article by Lori Borgman in The News & Observer on the 'poetry' of the extraordinary plethora of names for different shades of paint.

Modern poets try to restrict their use of adjectives for the sake of strength, punch and clarity. Are there times, I wonder, when names like those in the feature (e.g. Southern Pecan Pie, Sand Between Your Toes and Peach Slush, to name but three) are simply too irresistible to pass over?

In a recent draft of a poem as part of a Poetry Prompt Month for Sol Magazine, I found myself struggling to find a suitably dull alternative for the word 'beige'. Some colour names definitely seem to suit their respective shades, rather in the way that there can sometimes be an uncanny resemblance between owners and their pets. I should know about these things: many years ago, my Shetland Sheepdog won a green rosette in an exemption dog show class for coming third in the contest for 'pets who look most like their owners'!
Posted by Caroline Gill at 14:46 2 comments:

The sonnet, as I understand, became a part of the poetry scene in English under the influence of Thomas Wyatt in the early 16th century.

I came across the Cornish Sonnet for the first time today, and am in the process of trying out the form. Can anyone tell me anything about 'early' Cornish sonnets?

The Cornish Sonnet is purported to be a hybrid of English and Arab writing that found its form in the eighteenth century. It would be good to be able to back this statement up with some evidence!

Posted by Caroline Gill at 16:15 No comments: 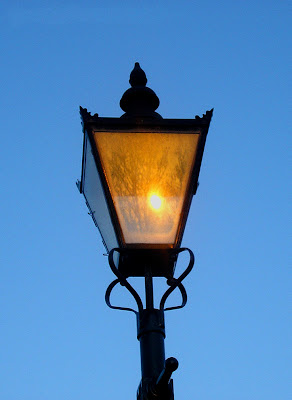 Left: a lamp in the Cathedral Close at St Davids, Pembrokeshire, Wales, UK. The reflection makes me think of Narnia and Mr Tumnus.

Galumphing: the title alone is a curious one, and it comes from The Jabberwocky poem by Lewis Carroll. It is the 'other' Lewis (C.S. Lewis), however, who features most prominently in this blog, along with a few others such as Tolkien, Homer and Shakespeare!

The blog belongs to Jeremy W. Johnston, a teacher of English and Classical Studies (two of the three subjects I trained to teach as part of my Exeter PGCE back in the 1980s).

On the subject of Tolkien, you might like to take a look at the blog entry for 18 August, entitled The Annotated Hobbit. I was particularly drawn to the words of Horace on the subject of reading and re-reading. If I really like a book, I like to read and re-read it. Do you?

Johnston highlights an interesting point about the etymology of Bilbo's name. Tolkien, C.S. Lewis and Lewis Carroll were all masters when it came to making up names for their characters. How often do we attempt to create new words? In my craft class last week, I tried to think of a term I could use to describe my new technique of turning a photograph into an abstract greeting card design. I am not quite there yet ...

Johnston mentions Homer, and I was reminded of how much I fell in love with the tale of Odysseus as a result of a child's version of The Odyssey. Perhaps that was why I went on to read Classical Studies for my degree. You might be interested to read an article by By George Elliott Clarke about the universality of the Homeric themes in the Chronicle Herald.
Posted by Caroline Gill at 14:26 1 comment:

Competition with a twist ... of lobelia 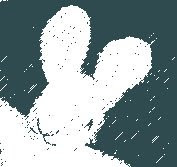 I came across a curious Poetry Nottingham competition notice on the polyolbion blog. I have seen some strange poetry contests in my time ... and it isn't even April 1st. I might just be tempted to have a go.
Posted by Caroline Gill at 22:02 3 comments:

Riddles in the Sand (ii)

Left: Curious 'statues' in the sand at Newgale, Pembrokeshire, August 2008.
(Click on photo to enlarge: can you spot the mummy?)

We have been watching Dan Snow's version of Hadrian's life on BBC2. It has been a whirlwind of travel from Hadrian's Wall to North Africa, and from Egypt to Jerusalem.

On the subject of Ozymandias again, I was particularly pleased to see the Colossus (or colossi) of Memnon in the desert in Egyptian Thebes, and to see the graffiti (a mere 2000 years old) of four Greek epigrams in the Aeolic dialect by Julia Balbilla, incised on the left leg of one of the statues (some 3000 years old). Julia Balbilla accompanied the emperor and his wife, Sabina, as they travelled in Egypt in AD130. They listened to the colossal 'singing' statues at dawn on 19 and 20 November, in the hope that they would hear the voice of Memnon from the stone as it expanded under the heat of the rising sun. The Colossus was, in fact, not Memnon (son of the Greek Eos or 'Dawn') but Amenhotep III.

Posted by Caroline Gill at 21:08 No comments: 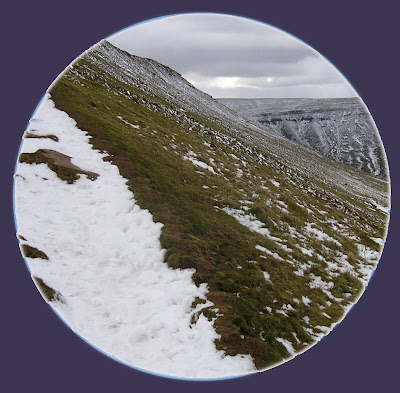 I am great admirer of Tony Harrison's craft, and the way in which he draws on aspects of the classical world. I watched his fiery film on 'Prometheus' some years ago, and see that Harrison has now turned his thoughts to the ice-cold footsteps of polar explorer, Fridtjof Nansen, in his new verse-play 'Fram'.

The critics, it seems, are not of one mind. There are those, according to The Telegraph, who feel that they prefer prose rather than poetry on stage. Rita Yeaman, on the other hand, in her comment on the feature in The Times feels that this is 'theatre at its best.'
Posted by Caroline Gill at 18:59 1 comment:

Blogging at Bay Lit: Shock of the New 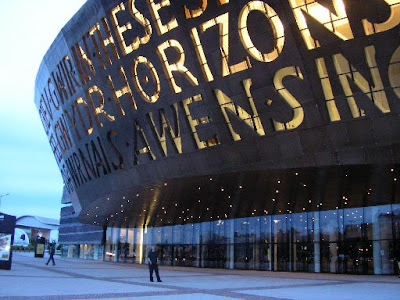 I can hardly believe that I began this blog back in May. It has been a fascinating journey of discovery so far, on account of the people - fellow poets and others - I have met along the way. I have become very interested in other literary blogs and in the ways in which fellow bloggers choose to showcase events, to display images and to incorporate podcasts, special effects etc.

I am something of a technophobe: it takes me a long time to grasp procedures. I tell myself that it is because I am left handed and like to think 'out of the box'.

I had a mailing from academi at the weekend, and noticed that Yemisi Blake, an 'Emerging Artist in Residence' at the Southbank Centre in London is due to lead a workshop on 'The Creative Art of Blogging' as part of the Cardiff Bay Lit Festival in October. I hope to pick up some new ideas and to have my 'blogging vision' stretched!

Photo: the Millennium Centre, Cardiff taken by David Gill
Posted by Caroline Gill at 21:17 No comments: 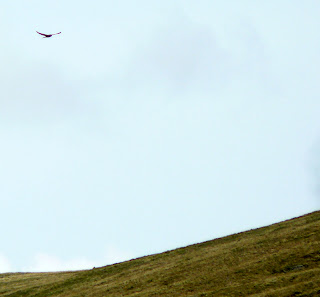 
P.S. The Guardian Blog had a good feature on mountains and the muse by Ben Myers.
Posted by Caroline Gill at 16:45 No comments:

Riddles in the Sand 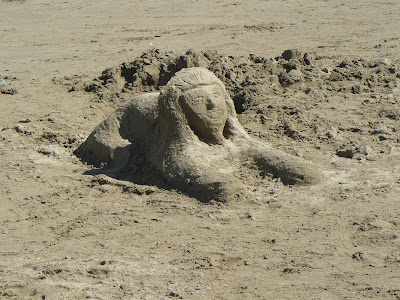 I stumbled across this Sphinx in the sand at Newgale in Pembrokeshire some days ago. There was also a rather fine pyramid. Both works of art were about to fall victim to the sea as it raced up the beach.

I couldn't help thinking of Ozymandias ...

I was also curious to discover how many poems I could call to mind concerning both the sphinx of Egypt and the sphinx of Oedipus and Theban mythology.