I joined others at Gainsborough Community Library in Ipswich yesterday for a Creative Writing Workshop. We were considering the topic of 'plot', which is not something that crosses my path very often in my poetry endeavours, although it certainly has a bearing on narrative poems. It made me realise (again) just how fundamental the concept of 'story' is to our lives.

The ancient Greeks knew this all too well, with their epic ring cycles that would allow the same yarn to be narrated in fresh ways. A child's version of Homer's Odyssey captured my own imagination at a young age. I went on to study and teach Classical Civilisation. We also think of Beowulf and of countless other myths and legends that became part of the warp and weft of our human society. The New Testament parables, stories told for a purpose, rely heavily on narrative. Think of 'The Sower' or 'The Prodigal Son'. Journalists tell stories. Most of us do.

But how often do we employ story-telling techniques in our poems? Should we be telling more stories if it is these tales that help us to come together and forge connections? We were talking yesterday about 'martyrdom' (among other things) as a feature that is common to many well-loved tales.'The Chronicles of Narnia', which we cited by way of example, speak for themselves at one level but also probe the heights and depths of something more - the Christian story, of good over evil, of the laying down of life for others.

The employment of an extended metaphor has been recognised as a popular and successful poetry ploy in recent years. Epic is 'out' in the traditional sense - or is it? There have been exciting re-workings of the old sagas and tales, but archaic language and sentiment have largely been abandoned or, at least, re-cast. I am currently reading 'Now All Roads lead to France' by Matthew Hollis, about the life and last years of Edward Thomas. It is fascinating to read about the Georgian poets and how very different they were to the emerging Imagists. Edward Thomas had a great gift for sharing small insights into the world of nature with his readers. Of course, he often employed narrative along the way: think of 'The Owl'. Today we worry whether it is 'enough' for a poem simply to paint a picture. Our response has sometimes been to use poetry as a vehicle for (often political) change. Adjectives and adverbs are treated with extreme caution - sorry, with caution - but are we sometimes in danger of aspiring to an art that is losing touch with its recipients? Poets may be driven to write for any number of reasons, but I found it helpful yesterday to be reminded that 'plot' is occasionally a useful tool to select from the work(shop) box.

P.S. And in case you were wondering, my organic writing in the workshop yesterday focused on an orphan, a multi-cololoured explosion and a rift in the cliff face ...

Posted by Caroline Gill at 11:00 No comments: 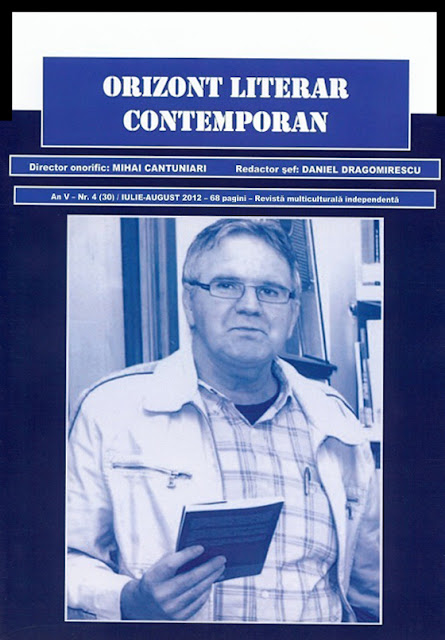 This is the latest edition of Orizont Literar Contemporan from Bucharest, Romania. As usual, it has been edited by Daniel Dragomirescu, with his wealth of experience in the field of bringing people together through the sharing of literature in its many different guises. Not for nothing does this multicultural journal have the strapline 'all the world in a magazine': this issue alone contains prose and/or literary criticism from many countries including Japan (Keiko Amano), Nigeria (Biola Olatunde) and India (Trishita Banerjee), in addition to poetry from - among other corners of the globe - Scotland (Neil Leadbeater), Wales (Byron Beynon) and Uganda (Zakaria Tiberindwa).

Do visit the website and find out more!
Posted by Caroline Gill at 11:54 No comments:


The Ipswich Waterfront by UCS is soon to be the setting for a renovated 'lighter' that once graced the River Stour in John Constable's day. The boat, part of the 'Managing a Masterpiece' project, will be on public view next Wednesday 29 September 2012. It has fittingly been named the John Constable.

You might enjoy a Folding Mirror Poem by Dr Marc Latham on Constable's famous Stonehenge painting ... here.
Posted by Caroline Gill at 19:08 No comments: