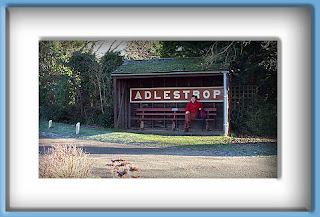 We joined the Cafe Poets at the lovely venue of Browsers' Bookshop in Woodbridge last night for the first time, and enjoyed an eclectic evening of poetry. The November themes of 'war' and remembrance' ran through the programme, with the chance to focus on works by Edward Thomas (hence my photo above), Siegfried Sassoon, Milton and others. Some members had brought their own work, and a good time was had by all. We enjoyed the coffee and cake, too! Thank you to all concerned.
Posted by Caroline Gill at 22:22 1 comment: 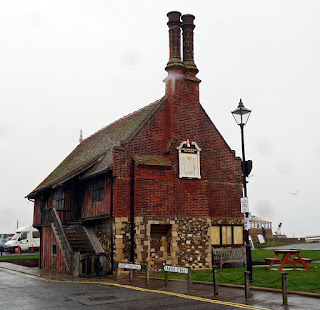 We spent a grey November day in Aldeburgh, enjoying the 23rd Aldeburgh Poetry Festival, laid on by The Poetry Trust. We had visited this beautiful east coast town before, but this was our first visit in 'festival season'. 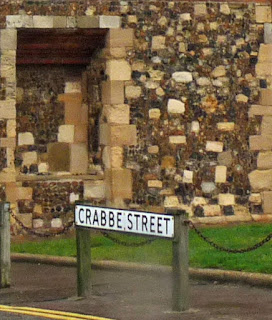 Aldeburgh is proud of its poet, George Crabbe ... 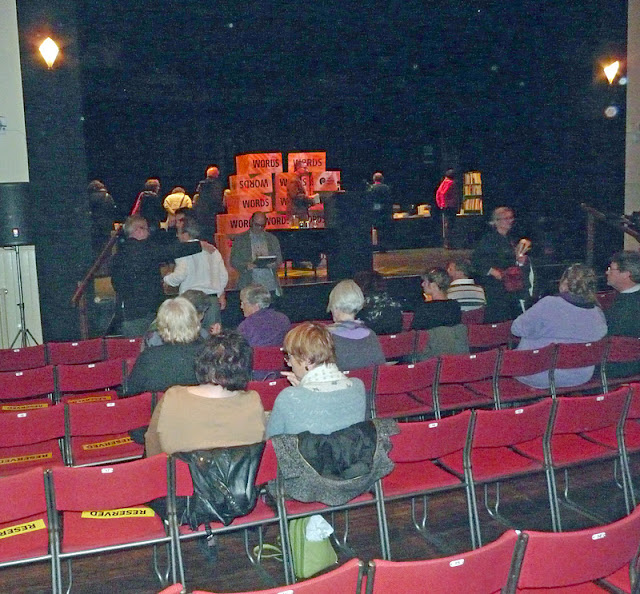 We had tickets for the Scottish Islands Reading event in the Jubilee Hall. Poets like Jo Bell, who had not arrived when I took this photo, and Penelope Shuttle joined the audience of local people (like us!) and followers who had come from further afield. There were representatives from the Poetry Society, and it was good to meet Judith Palmer for the first time. 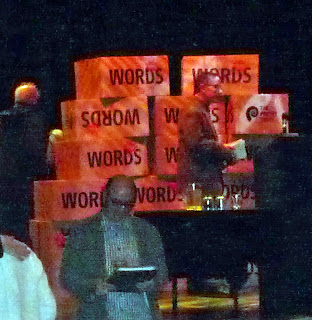 Words are the building blocks of poetry (see photo above), and it was particularly exciting to hear three poets flitting between languages, namely the languages of Gaelic, Shetlandic and English. Of course, this kind of rich diversity is not new to me, having just moved from the bilingual climate of Wales where the 'dragon has two tongues' (see here).

The three sets of readings were by Robert Alan Jamieson from Lerwick, Shetland; Meg Bateman, a lecturer at the Gaelic college, Sabhal Mòr Ostaig, on Skye - and an honorary lecturer in English at St Andrews University ... and Rody Gorman, who was born in Dublin and also lives on Skye. Rody has translated Cavafy poems into Gaelic.

There were various threads running through the poems, and Jamieson's short poem, 'Welcome to the Folk Museum', struck a particular chord with me, reminding the reader (or listener) just how easy it is to 'romanticise' the Highland and island way of life, glossing over the stark realities at e.g. the time of the Clearances.

Readers of this blog will know that we have a great affinity with Eilean a' Cheò aka the 'Misty Isle'. We also enjoy (if that is the right word) the heart-rending poetry of the Raasay poet, Sorley MacLean, so we were particularly pleased to have the opportunity of hearing some modern Gaelic voices. It was interesting to learn that while Gaelic has a limited lexicon, it has a richness of its own as so many of its words have a plethora of meanings.

Thank you to all took part and to those who gave us fascinating insights into the poetry of the northern isles. 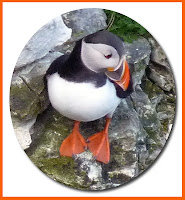 Reach Poetry issue 158 arrived this morning (thank you, Ronnie and Dawn at IDP). There are some great new poems in the magazine - not forgetting a fabulous cover of a certain Border Collie called Soxx.

It was great to find my name in 'The Box' for my 11-syllables per line Sonnet* on - you've guessed - those amazing Yorkshire Puffins. My poem was voted 4th out of those published in issue 157 - so thank you to all who chose it.

Many congratulations to Tina Negus, who took First Place with her brilliant poem, 'A Contradiction of Hoopoes'.


* Shakespeare's Sonnet XX had 11 lines per line, which was unusual - but I like the rhythm.
Posted by Caroline Gill at 22:22 No comments: