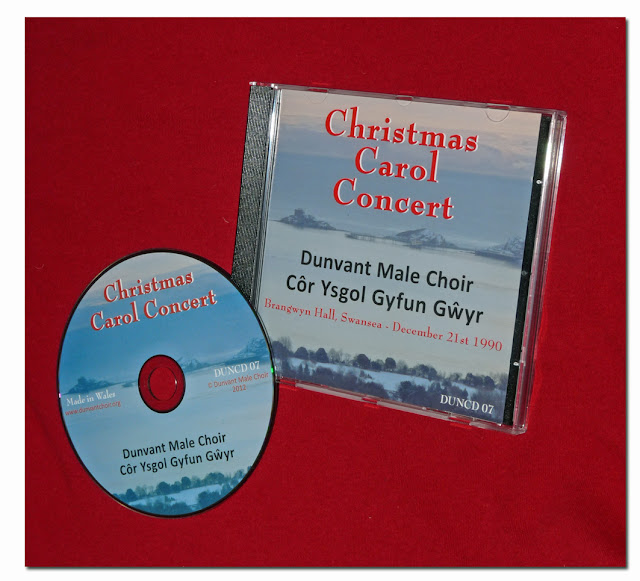 I have just received copies of the above CD, which features my photograph of Mumbles in the snow. It was taken from my study window during our time in the city.

The CD features music by the Dunvant Male Choir. The CD cover was produced by students (under Paul Hazel) at Swansea Metropolitan University.

If you fancy some Christmas music from Wales and would like to buy a copy, purchasing details can be found here.

And, incidentally, you can see another of my snowy scenes of Mumbles here on the Golau Cancer Foundation homepage.
Posted by Caroline Gill at 17:31 No comments:

I opened the current (January 2013!) edition of Writing Magazine today to find that my submission for the Members' News section had been accepted for publication. It consists of half a column on my poetry chapbook, shared with John Dotson (above left), and published by Peter Thabit Jones (above centre), editor of The Seventh Quarry, in conjunction with Stanley H. Barkan of Cross-Cultural Communications, New York.

The piece is on p.16 in the Members' News section.

If you would like to buy a copy of the chapbook, perhaps as a stocking filler or gift for a poetry lover, the cost is £3.50 including UK p&p. More details can be found on my website here, and you can contact me either via the red 'contact' button on the site or via the Comments section just under this post.


I am very privileged to be hosting Carol Hamilton's *unofficial* answers, which correspond to those in The Next Big Thing.

Carol is a former former Poet Laureate of Oklahoma, and resides in Midwest City, Oklahoma, U.S.A. 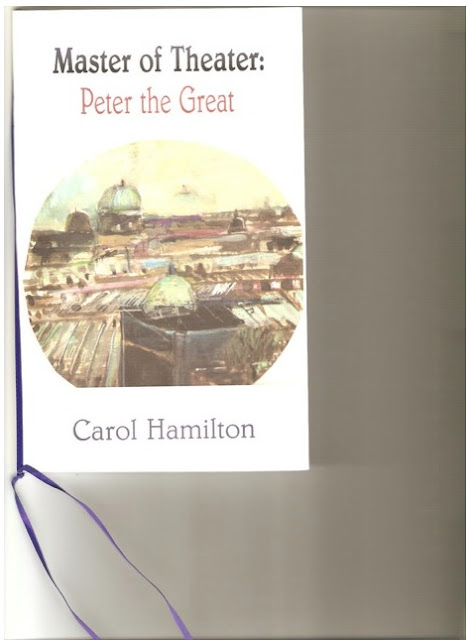 What is the title of your new book?

Master of Theater: Peter the Great

How did you choose the title?

One of the book's poems, "The Humility of Peter the Great," begins, "A master of theater,  as are all great men...."  The line seemed a good title for the book, which reflected Peter's dramatic and erratic personality. He valued and enhanced the drama of his presence to draw his people to him.

Where did the idea for the book come from?

I read the book PETER THE GREAT by Robert K. Massey. When I become completely captivated with a subject or a personality, I cannot keep myself from writing of what fascinates me and stirs my imagination. One of my chapbooks is called SHOTS ON and is on early women photographers of the American West, and another, CONTRAPUNTAL, is on the love of Clara Schumann and Johannes Brahms. All three of these books were published by the same press in Kentucky, Finishing Line Press. Peter was an amazing character. I could not resist!

What genre does your book fall under?

What actors would you choose to play the part of your characters in a movie rendition?

For Peter, since he was tall and thin, I think it would have to be Peter O'Toole.

Will your book be self published or published by an agency?

The book was published in July, 2011 by Finishing Line Press, P. O. Box 1626, Georgetown, Kentucky 40324. It is available at www.finishinglinepress.com or at amazon.com.

What other books would you compare ‘MASTER OF THEATER’ to within the genre?

One of those who wrote a blurb for the book, Editor Michael Hathaway of Chiron Press, compared it to the poetic portrayals of Robert Peters and the wonderful historical poems of Robert Cooperman.

Who or what inspired you to write this book?

Most of my poetry books are themed, such a peace poems, poetry on food, poetry on words and language, on art and artists. These books are usually compilations of works I've written over the years that happen to fall into the same category. The books published by Finishing Line Press were all written at one time until there was enough, or too many, for a chapbook. It is very interesting to become so involved in one subject and in the lives of those who have been remarkable in their dedication to and brilliance in their life work.

What else about the book might pique a reader’s interest?


One thing I personally enjoy about these books is that they are intended to be read from the beginning to the end, more of a story than a series of poems on a theme.

What is the one sentence synopsis of your book?

This book follows the life of Peter the Great from his childhood through his world travels to bring the Western world to Russia and his wild manner of forcing these changes on his people with great impetuosity.

Thank you, Carol, so much: it is a privilege to host your answers! Thank you, too, to Dr. Geraldine Green for introducing me to Carol.


Incidentally, you will find Geraldine's answers for The Next Big Thing here ... and my answers can be found here.

Other writer participants in this blog meme include ...

Posted by Caroline Gill at 19:29 No comments:

I heard last night that my entry will be included in the new competition anthology. My poem is an ekphrastic one inspired by the 1852 Holman Hunt painting, 'Our English Coasts' (aka 'Strayed Sheep').

Last year's anthology can be bought (and previewed) here.

The 'Pre-Raphaelites: Victorian Avant-Garde' Exhibition is on at Tate Modern in London until 13 January 2013.
Posted by Caroline Gill at 13:39 No comments:

The Writing Life: Save our (Newcastle) Libraries

Do take a moment to read about the projected cuts in Newcastle upon Tyne, that vibrant city where I was initially a university student, and then later on a resident, attending weekly Creative Writing classes for adults under the auspices (a) of the The People's Centre in North Shields and (b) the WEA (under the tutelage of Margaret Wilkinson).

There are pleas from authors in the Newcastle Chronicle: they feel it would be a tragic move to close so many library resources across the city.

As a student I was a frequent visitor to the Newcastle University Library. I remember many a happy morning in the old City Library during the time I attended the Creative Writing classes. I still recall looking up facts about the eating habits of raccoons - and about Cortes, cocoa and the New World.


A group of writers in Newcastle have set up a WordPress site to show the support of 'Writers for Libraries', through poetry and prose contributions. Poetry Scotland editor, Sally Evans, has written vividly about the Newcastle University library 'Stacks': I remember these so well. Her prose piece, 'Her faith in Libraries', can be found here.

You will find my contribution here. It is a poem called 'Ode to Our Treasure Keepers'.