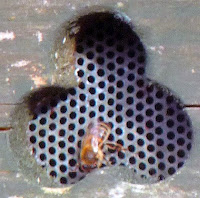 An early honey bee at the National Botanic Garden of Wales
February 2009
Yes, small can be beautiful according to Schumacher, but was he the first to coin this phrase and why did it catch on? Poets have long been known for their sweeping epics and their pithy epigrams. At the end of the day, the main challenge is not about quantity (or lack of it) but quality in all its rainbow manifestations. For Edward Thomas, no subject was too small for a poem: it was the large topics, he felt, that could pose problems. These days we are bombarded with the soundbite and with the tweet of Twitter. I went to a class yesterday and began to appreciate just how much material (in terms of what was shown, heard and hinted at) could be fitted in to a two-minute digital story.

Bylines and straplines are part of our zeitgeist; and although we live in an age that does not often lean towards formal poetry, short forms like the haiku and the tanka remain popular. Just a Minute on BBC Radio 4 has always had its followers, and there are blogs offering short writing memes. If the thought of drafting a complete poem a day is a bridge too far, just think how many ideas we might amass in our poetic honey pots if we set aside a minute every twenty-four hours for organic writing. Time check: the moment has come to stop blogging and set the timer ... Why not join me in one of the exercises below? Let me know how you get on!