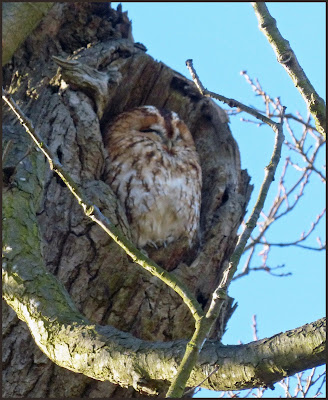 The Tawny Owl in the photo above is known as Mabel. She is well known to those of us who live in the Ipswich area as she frequents the town's Christchurch Park and has for many years returned to the hollow branch of the tree in the picture.

I was delighted to begin the year with a cheque representing the fact that my Barn Owl poem had been voted 'Second' in the readers' votes for the December issue of Reach Poetry, one of three flagship magazines from Indigo Dreams Publishing.

I heard today that my entry for the Indigo Dreams Pamphlet Competition had gained a 'Commended'. More good news, but of a kind that leaves little room for complacency as it would be good to see the poems published as a batch. Unlike Mabel, I intend to keep my eyes wide open.

As for specific 2017 writing goals, well, I have an 'illumination of ideas' but am still at the formulating stage. I wonder what goals you have in mind?

Posted by Caroline Gill at 21:59 No comments: