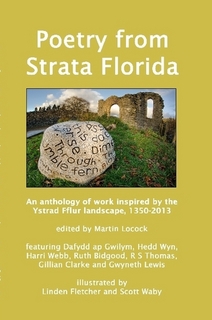 I would like to mention this new book of poems, edited by Martin Locock of Carreg Ffylfan Press, about a very special place in Wales, namely the area around the ruined Cistercian abbey of Strata Florida, also known as Ystrad Fflur. Strata Florida lies between Pontrhydfendigaid and the wonderful Red Bog of Tregaron in Ceredigion.

The abbey was founded in 1164. The Abbey Church, in the care of Cadw, is adjacent to the graveyard, which is still used for burials. According to tradition, it is the resting place of the 14th century Welsh language poet, Dafydd ap Gwilym, and a memorial to him can be viewed under a yew tree. This ancient yew shades the bodies of eleven princes of the Welsh Royal house of Deheubarth, who were also buried here during the 12th and 13th centuries. A stone marker in the Chapter House commemorates these princes.

It is always a thrill to arrive at the site and wander up the Great West Door to the Abbey Church. The carving around the archway frames the mountainous scenes beyond. The new anthology includes work inspired by this Ystrad Fflur landscape from 1350-2013. It includes illustrations by Linden Fletcher and photographs from Scott Waby.

The new book is available for purchase via the Carreg Ffylfan Press website. The cost per copy, inclusive of p&p, is £10.


My thanks to Matt, Juliet, Sally. Further comments on the The Holy Place can be found here.

Posted by Caroline Gill at 09:52 No comments:

Coming soon ... the issue which includes the Norfolk and Suffolk Dozen of Poets. There is a preview here, with a poem, 'Day Out', from Sue Wallace-Shaddad.

The journal costs 15 Euros (plus 2 Euros tax). Please get in touch if you would like to buy a copy. 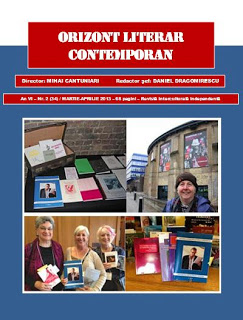 OLC/CLH-ALL THE WORLD IN A JOURNAL

Posted by Caroline Gill at 23:05 No comments: 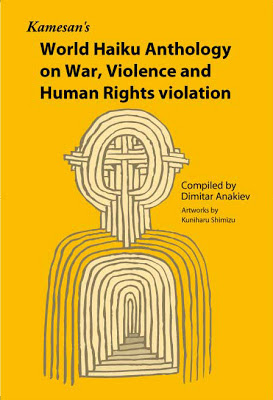 'This landmark collection,
interweaving hundreds of poetic voices from around the world,
creates a powerful statement for peace and against war.'

This volume of world Haiku has just been published by Kamesan Books. The volume has been edited by Dimitar Anakiev in Radovljica, Slovenia. Anakiev was born in Belgrade, Serbia, and is a co-founder of the World Haiku Association. The new anthology contains 903 Haiku from 435 poets in 48 countries, writing in 35 languages. The accompanying artwork has been created by Kunihara Shimizu from Tenri in Japan. The collection begins with Basho in the 17th century and goes on to include much contemporary work. My Haiku, written in response to the vision of a convoy of tanks on the M4 Motorway, is listed as 298 on p.134.


'This is a multicultural book against war and violence
that connects people from different nations around the world.'

Posted by Caroline Gill at 09:51 No comments: