My Part in the Poetic Blog Tour

My thanks to Martin Locock for inviting me to join the current Blog Tour.

My understanding is that I have to answer the four questions below and then invite a fellow writer or two to do the same. So here goes ...

What am I working on?

As some will know, my first chapbook of poetry, co-authored with John Dotson in California, came out in 2012. It was called The Holy Place and was published by Peter Thabit Jones of The Seventh Quarry (Swansea) and Stanley H. Barkan, editor of Cross-Cultural Communications (New York). The chapbook was part of a commissioned 'Poet to Poet' series in which a UK poet was paired with a poet from elsewhere. The chapbook was launched at Number 5 Cwmdonkin Drive, birth place of Dylan Thomas.


The poems in my half of the collection find their focus in the landscape and its creatures. Ecological issues - climate change and the declining numbers of certain native species - are not overlooked, but I hope my chosen words stand or fall on their own merit before any 'message' protrudes from the page. The title of the chapbook is taken from one of John's poems, and although I write from my perspective as a Christian, these particular poems are not 'religious' in any traditional or overt sense.

So that is my starting point. Since the publication of the chapbook, I have been trying to consolidate my body of work inspired by the natural world. I have made a conscious effort to become a better observer so that my writing in turn becomes more incisive. That's the theory! I use notebooks and a camera to record my sightings. They don't all worm their way into my poems, but I like to watch the birds on the Silver Birch I have chosen as part of the Tree Following project, and to follow the story of 'Mabel', the Tawny Owl in one of our local parks. I have been looking for Ladybirds and logging my findings on the UK Ladybird Survey for some years now.

Small may be beautiful, but I am keen to embrace the wider picture, too. I passed my O level in Biology at school, but veered away from science and mathematics as much as possible. These days I am fascinated by the interface of poetry and science. A sonnet written as a result of observing a Perseid meteor shower was shortlisted in the 2013 Paragram competition.

I am about to embark on a project with the Poetry School. It involves three study days in the Scott Polar Museum in Cambridge, where Kaddy Benyon is working alongside the Museum's staff to develop poetry-themed outreach. The project was inspired by the work that was initiated during the Thresholds residencies in 2013, and brought to a wider audience during the 2013 Cambridge Festival of Ideas.

Speaking of Cambridge, I recently attended the launch of Glass Cases and Curios in the Sedgwick Museum of Earth Sciences. The anthology, which contained one of my poems, was produced by 2013 Fen Laureate, Leanne Moden, with assistance from Karen Harvey. My background is in teaching (secondary and EFL) and archives. David, my husband, is an archaeologist. We are both fascinated by aspects of the past.

I am also intrigued by form in poetry in all its guises, and by the nature of metaphor. I was pleased to have work accepted for The Book of Forms, including Odd and Invented Forms by Lewis Putnam Turco (UPNE) in 2012. I have enjoyed experimenting with anglicised versions of the Ghazal, largely thanks to The Ghazal Page, and look forward to learning more about this kind of poetry.

I have begun the process of compiling a single authored collection. I am not renowned for my speed, so it will be a case of watching this space for a while. Meanwhile, I continue to be an External Collaborator for the Romanian literary journal, Orizont Literar Contemporan (OLC), under the editorship of Daniel Dragomirescu. The latest poet to feature on the OLC site is Gillian Clarke, National Poet of Wales. My interview with Martin Locock about the production of his recent Strata Florida anthology appears in the latest OLC Antologia.


How does my work differ from others in the genre?

I have a reputation for approaching tasks in an unusual way. This may be partially on account of my left-handedness. It may be more to do with the fact that I am somewhat 'landless'. I have moved about a fair bit during the course of my lifetime, from Rome in the south to Norfolk in the east; from Newcastle in the north to Wales in the west. When I am asked the question, 'where do you come from?', I never quite know what to say. I have been involved in international enterprises and activities for many years and perhaps find myself caught in the balance between being a citizen of the world and a would-be local custodian of Blake's grain of sand.

I am not a very political creature in the 'political' sense of that word. I feel passionately about certain things but my poetic voice, I'm told, often comes across as 'controlled' rather than 'outraged'.

My love of form makes my poems stand out (for better or worse!) from many that I encounter. I have great admiration for those who write free verse with flair.

Why do I write?

I write because I have always written - well, almost. I am a shy creature by inclination, although I am more confident than I used to be. In the past I preferred to express myself on the page, whether through the medium of drawing (e.g. in the 'news book' in kindergarten) or whether through writing letters, which I did a lot in my teenage years, following a house move away from friends. I have always loved words, whether in the form of books or word games. I won my first poetry prize at the age of eleven.

How does my writing process work?

This is a tricky question because there is no set formula. That said, there are certain traits or 'norms'. I aspire to using a pen or pencil because I like the idea of connection, of thoughts flowing through the brain and along the arm straight on to the paper. But I rarely compose in longhand these days. The computer keyboard is my medium of choice.

I might be inspired by a wildlife sighting or by a magazine article. I particularly like competitions and anthology calls that give a theme or subject. I sometimes blitz an idea by doing a spidergraph. I nearly always tap out the alphabet if I am looking for rhymes or near-rhymes.

Poems practically never 'arrive' on my page. Dylan Thomas spoke of labouring by 'singing light' and this rings true, particularly the labouring bit on occasions! I sometimes assist with creative writing groups, and always look forward to receiving prompts in any form. I enjoy art, and find that postcards and paintings can trigger a poem. I try to allow time for a poem to 'settle'. By this stage it may have been through twenty drafts in a quest to see if there is indeed a small pearl tucked away deep inside the oyster.

I have invited a couple of poets to take part in the Blog Tour, namely ...


Do take a look at their posts about writing, the environment and more besides.


And finally, here are a couple of links to others who have already taken part ...

My copy of the Antologia for Orizont Literar Contemporan | Contemporary Literary Horizon arrived today from Romania. This publication opens with a sequence of poems by Peter Thabit Jones, editor of The Seventh Quarry, from Wales. It also features my interview with Martin Locock, editor of the new anthology, Poetry from Strata Florida, produced by Carreg Ffylfan Press (2014).

I am grateful to Iulia Andreea Anghel at the University of Bucharest for her translation, '1 Mai: Zmeu Roşu în Strata Florida', of my poem, '1st May: Red Kite at Strata Florida'. 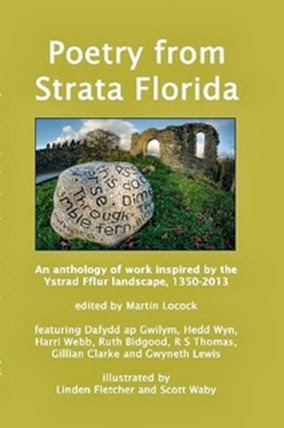 Posted by Caroline Gill at 16:17 No comments:

There is a new poetry anthology out from the Pre-Raphaelite Society, edited by Dr Serena Towbridge. The blurb on the back runs as follows,

The anthology contains my sonnet, 'Strayed Sheep on our English Coasts'. You can see the painting of 1852 by William Holman Hunt that inspired the poem by clicking the link here.

Copies of the anthology are for sale here.
Posted by Caroline Gill at 18:56 1 comment: 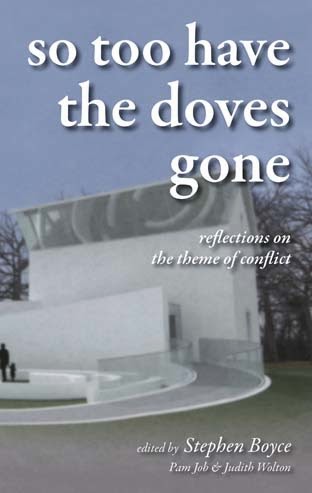 We had an excellent evening at The Minories in Colchester last night, launching the new poetry anthology, so too have the doves gone, to mark the anniversary of the Great War.

The book, published by Jardine Press, was edited by Stephen Boyce, Pam Job and Judith Wolton. It contains contributions from a range of poets, largely but not exclusively from Essex and Suffolk. The evening began with a slideshow of the new Wilfred Owen Memorial at Forester's House in northern France, a building summed up in the metaphor, 'bleached bone'.

The event was part of the Essex Book Festival and was very well supported. Poems spanned wars from Homer to the present day. There were many different 'takes' on the theme of conflict and peace. I read my Edward Thomas poem about the poet's decision to enlist.

The evening afforded guests the opportunity of viewing the complementary artwork produced by students of Fine Art at Colchester Institute. Many of the images have been reproduced in the book.


The anthology concludes with a poem called 'The Standard of Ur' by Julia Brady. It draws to a close with the thought that 'art ...builds up some clear-cut arguments for peace.' If the poems and ekphrastic images in the book promote something along these lines, they will surely have done their work. 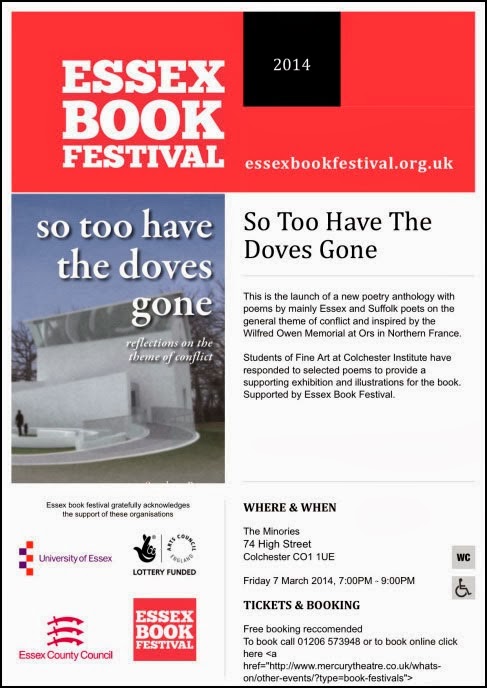 Postscript: see here for a review by Dave Martin.

Posted by Caroline Gill at 18:12 No comments: