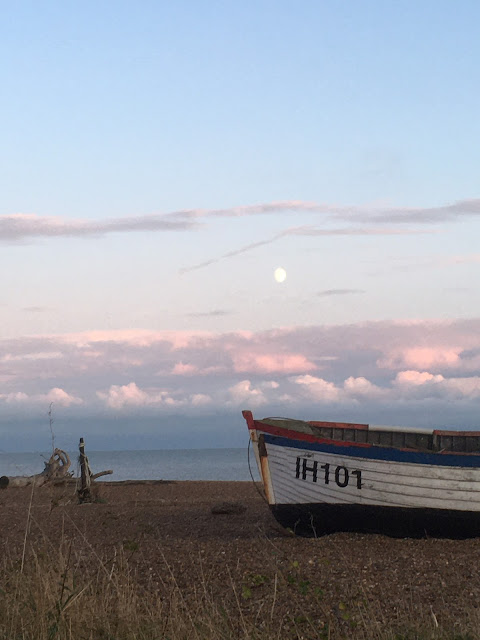 I have arrived back home after a wonderful day in Aldeburgh, which began with a picnic lunch by the North Lookout and ended with a take-away meal near The Scallop. There was much poetry in between.

I attended Patricia Debney's stimulating Prose Poetry workshop, and completed a first draft of a new piece (which includes the word 'elephant'). An hour or so after the workshop, David (Gill) and I found ourselves on the Crag Path, making our way towards the Peter Pears Gallery for the launch of the new Port anthology from Dunlin Press.

Ella Johnston and MW Bewick of Dunlin Press introduced their new volume before Rosemary Appleton, Julie Hogg and I each presented a small coastal set including our Port contributions. Thank you, Ella and Martin, for inviting us to be part of this occasion. 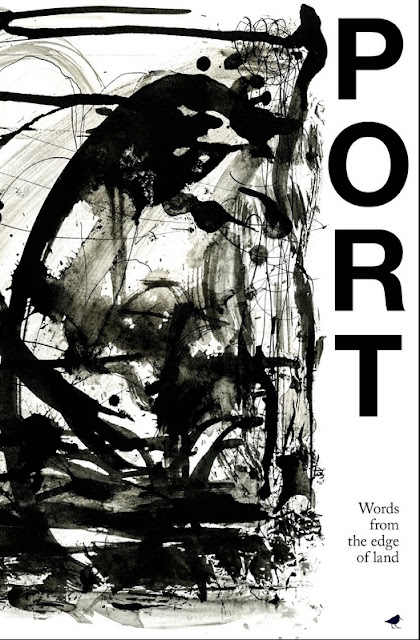 The photograph below shows the book along with three of the Portpatrick photo-images that fed into my Port poem.The bird, in case you were wondering, is a Black Guillemot: these birds have red feet and are often referred to as Tysties on Shetland and in some mainland parts of Scotland. 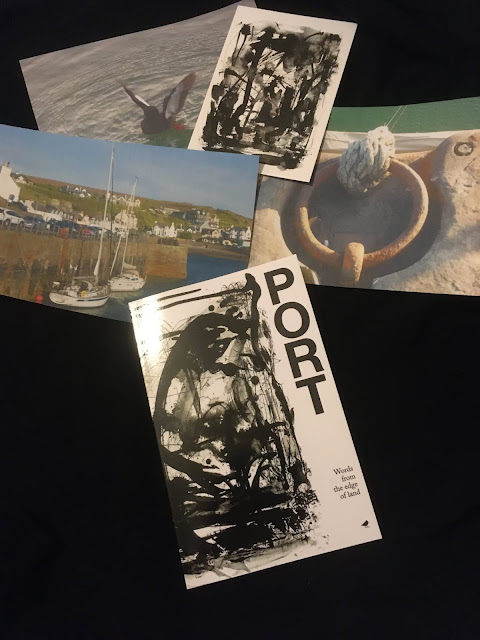 Here we are, with the sea only metres away from the Peter Pears Gallery... 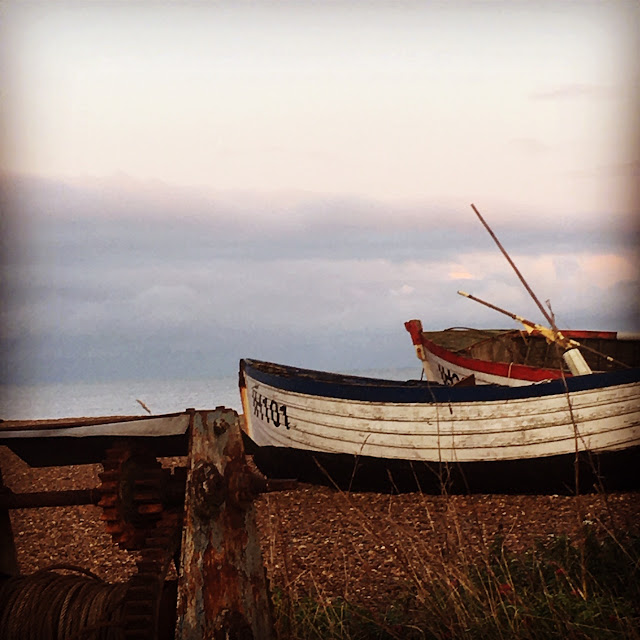 ... making it seem very natural that the Port launch should share space with the launch of 48 poets write at the coast, an exquisite pamphlet edited and produced by Maria Isakova Bennett of Coast to Coast to Coast. 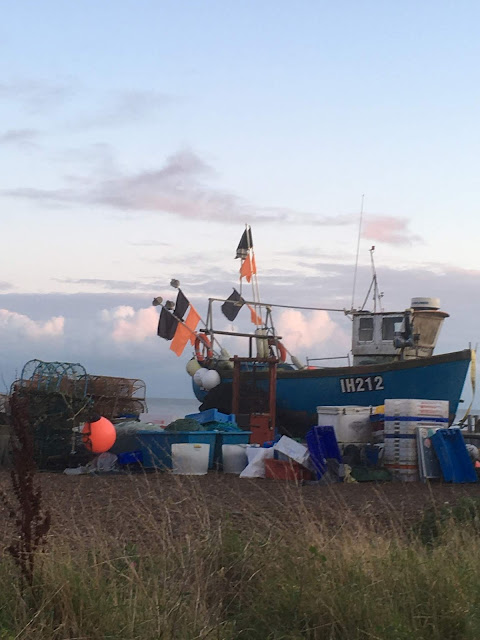 In between the workshop and the launch David and I refuelled with cups of Earl Grey. No prizes for guessing who chose the slice of chocolate and ginger cake... 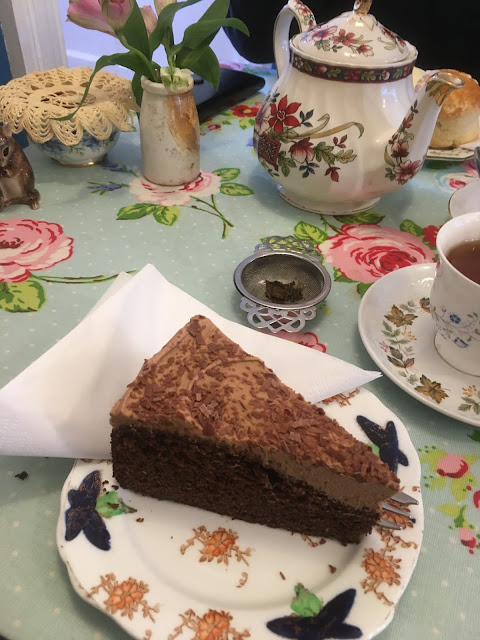 After the launch, a few purchases from the book table and a short time at the festival party, we left the gallery and crossed the road for two 'Aldeburgh essentials', otherwise known as two bags of fish and chips, which we devoured by the light of the November moon. 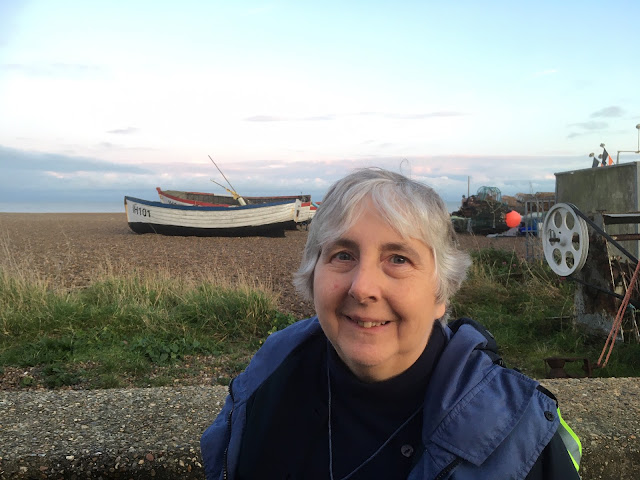 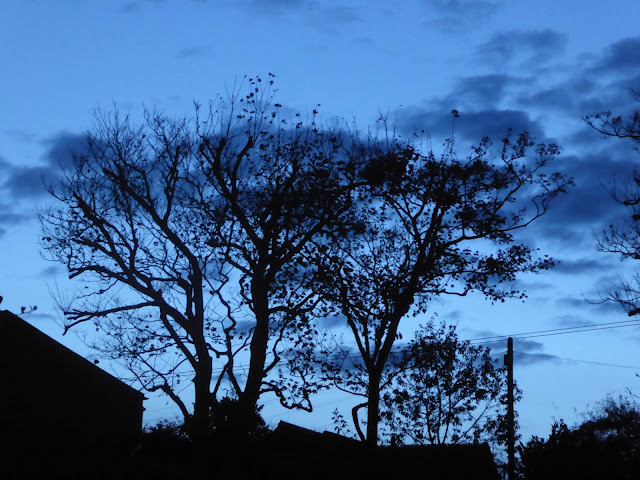 ...here are a couple of brooding sky photos. 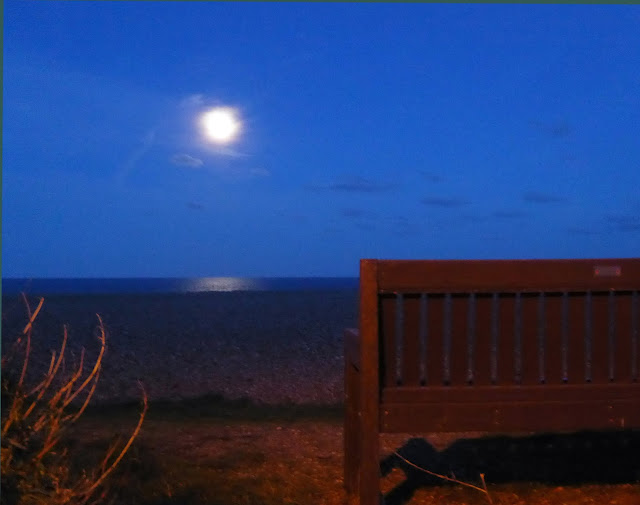 
My poem-and-letter submission [9/2019] has been accepted for the 2020 Indigo Dreams Publishing 'Dear Dylan' anthology (to be edited by IDP poet and Cheltenham Poetry Festival Director, Anna Saunders). My poem has a Cornish setting since Dylan and Caitlin got married in Penzance, but my letter is based in Swansea, which was my home for nearly twenty years.

And, on the subject of poets with a Swansea link and the surname Thomas, we have just ordered a copy of Jeff Towns' new edition of 'Swansea Village' by Edward Thomas. My copy has been tucked away until my birthday, but I'm told it includes contributions from Jeff Towns, Peter Thabit Jones (who published my chapbook), Andrew Green and Peter Stead.
Posted by Caroline Gill at 23:12 No comments: