Cambridge Festival of Ideas 2013 ~ The Poetry of Things 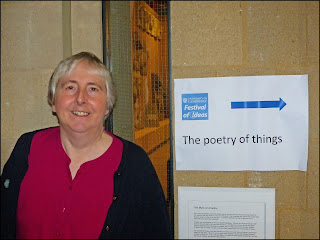 We were really excited by the Cambridge Festival of Ideas, and particularly glad that we were able to obtain tickets for the 'Poetry of Things' event in the Cast Gallery of the Cambridge University Museum of Classical Archaeology.

Each poet described aspects of his or her residency in an assigned museum - or University Library in the case of Imtiaz Dharker. The poets presented poems that had been written on their residencies and the audience were invited to ask questions about the creative process and about the way in which the poets had responded to their allotted collections.


I am looking forward to another poetry event in Cambridge, this time in December in the Sedgwick Museum of Earth Sciences. The Fen Poets and their Young Curators will be launching a new poetry pamphlet on artefacts in museums throughout the eastern region. I am looking forward to reading my contribution. More details to follow ...
Posted by Caroline Gill at 22:33 No comments: 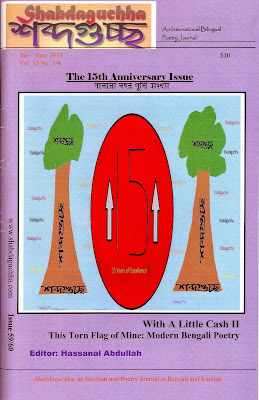 This Bengali poetry magazine with an international flavour is edited by Hassanal Abdullah from his home in the USA. I was made aware of this multilingual magazine back in 2011 when I was invited to contribute to a section on poetry from Wales, along with Aeronwy Thomas (1943-2009), Peter Thabit Jones, Jean Salkilld, David (Gill) and Lynn Hopkins.

Fifteen years is a long time in the life of a poetry magazine! Two of the highlights along the way (in my opinion) have been pieces on the Swatantra Sonnet (devised by the editor) and a feature on Cajun poets, presented by Beverly Matherne.

Issue 59/60 contains birthday greetings from Stanley H. Barkan, editor of Cross-Cultural Communications in New York, from Laura Boss, Kristine Doll, Maria Mazziotti Gillan, Tino Villenueva and many others. My anniversary tribute can be found on p.16, under the heading 'An International  Celebration of Literary Adventure'.
Posted by Caroline Gill at 23:08 No comments:

Collaborative Conversations ~ a meeting with Suzanne of Lemonkitten Design


I had a very enjoyable meeting some days ago with Suzanne Franks of Lemonkitten Design. Back in the summer Suzanne mentioned that she might like to work on some poetry illustrations, so we thought we would have a preliminary chat and see whether it could perhaps lead to some sort of collaboration.

I first encountered Suzanne's designs when we moved to Ipswich two years ago. I am particularly drawn to her crisp use of colour, her exciting sense of pattern and her clean lines. Suzanne, it seems to me, draws a fair amount of her inspiration from animal and plant life, so although it is early days and we are keeping an open mind, I am feeling excited about the possibility of combining aspects of our work.

You can find Lemonkitten Design on Facebook ... by clicking here!


Thank you to all Reach Poetry readers for your votes on #180, listed in #181. My poem, 'Otter Watch', came second in the October issue of this magazine from Indigo Dreams Publishing. Congratulations to Tina Negus for her poem, 'Billy', which came 'top of the box'.