Of bowls and bats 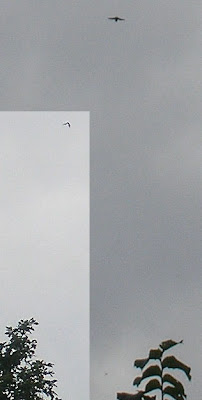 The May/June 2008 issue of Archaeology ran a fascinating feature on a 'Townsend's long-eared bat' bowl (c.1050-1150 AD) in its Artifact column. The bowl was found in the Cameron Creek area of New Mexico in the Mimbres River basin.

Bats feature in literature (Shakespeare ...) and art (Goya ...), but it would be interesting to discover other bat representations on ancient pottery.

Ilhuicamina (aka Thomas Aleto), Professor of Anthropology at St. Louis, Missouri has posted a fine Mayan bat plate on flickr, and also a Zapotec bat bowl from the Saint Louis Art Museum.

The clay face of a bat was found at Taíno, a pre-Columbian ceremonial site in Puerto Rico. Source: an article by Mike Toner in Archaeology, Volume 61 Number 2, March/April 2008.

I have already mentioned on my Bookshelf (bottom right) how much I like the poetry anthology On a Bat's Wing, edited by Michael Rosen and published by Five Leaves Poetry.

Thanks for this - I like bats. Not written about them yet though. Have you?

Yes, I love bats, too. Went on my first bat-watch in Northumberland many years ago! These days we have bats in the garden at home.

Yes, I have written poems about bats: three come to mind (two in print - one in Manifold, one in Linkway - and the third, is a finished draft in the 'brewing' (or should that be 'hibernating'?) stage.

I invited myself on a bat box checking day.
Of course only the bat expert was allowed to ascend the ladders to check / clean out the boxes; the rest of use carried ladders, torches and associated paraphernalia through he brambles for him! Nevertheless it was a pleasant morning.