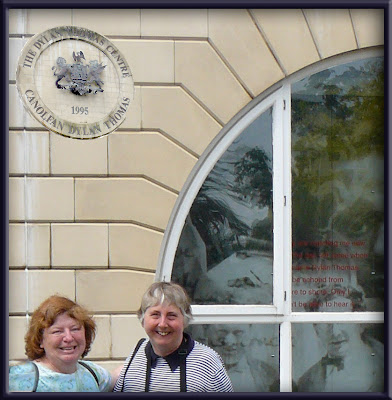 Wendy Webb's latest anthology has a colour photograph of the Suffolk village of Lavenham on the cover. The first poem inside is an ekphrastic one, 'Old Sailor's Tale' by Pamela Trudie Hodge, who drew her inspiration from 'The Depths of the Sea' (1886) by Edward Burne-Jones.

There are also a number of poems from invited guests, including Alison Chisholm, Sophie Hannah and Geoff Stevens.

Wendy (and members of her family) met me for coffee at the Dylan Thomas Centre some days ago. In view of our chosen rendez-vous, it seems appropriate to mention the poem, 'Fadeless Light', chosen by Wendy for the anthology as a tribute to Margaret Munro Gibson. This poem (by MMG) was originally published in an earlier edition of Wendy's TIPS: it pays homage to Dylan's villanelle, 'Do not go gentle into that good night'.

I have subscribed to TIPS for some years now. The venture began as a writers' group for those who found it easier, for whatever reason, to belong to a postal group. Wendy still offers the chance to belong to a community of writers. She runs competitions and has devised several successful poetry forms including Magi poems, Echotains and Davidians.
Posted by Caroline Gill at 22:25