'The Gloucester Fragments', a Poetry Collection by Neil Leadbeater 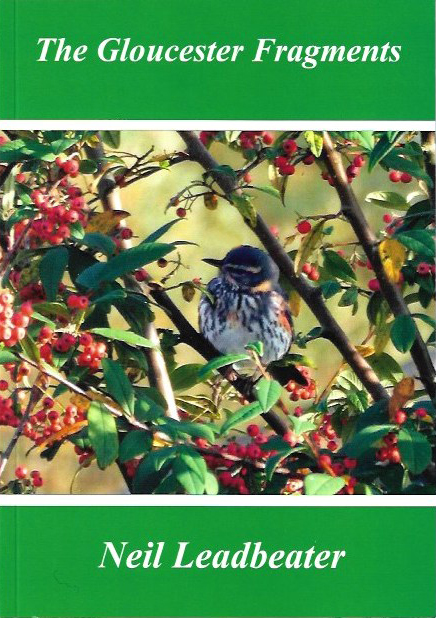 I was delighted when Neil Leadbeater asked if he could use my Redwing photograph for the cover of his latest poetry collection, The Gloucester Fragments, recently published by Mervyn Linford of Littoral Press.

Polly Stretton in her back-cover blurb decribes The Gloucester Fragments as 'a real treat' and helpfully informs the reader that the new collection includes poems on the themes of 'nature', 'language' and 'myth'. And indeed, I am greatly enjoying poems 'inhabited' by the Shoveler ('Frampton Pools'), poems that 'play' with the building blocks of language to singular effect ('Errata for an English Pangram'), and a clever shape-shifting poem that re-casts the Homeric tale of Odysseus and Circe.

There is so much more: take, for instance, Neil's clever allusion to nursery rhymes or the way in which he moves deftly from serious subject matter, such as detritus in the Severn, to the magical botanical names of wildflowers like 'periwinkle', 'fumitory' and 'hemp agrimony', which we find sprinkled, or scattered, throughout this vivid and compelling collection.

Gloucester, and perhaps particularly Gloucestershire, will doubtless evoke different images among Neil's readers. I think especially of Edward Thomas, and am immediately taken in my mind to Adlestrop, which I visited some years ago on a frosty morning when there were certainly no 'haycocks dry' in evidence. Neil's delightful and inventive response to this well-loved poem by Thomas took me by surprise and put a wide smile on my face.

Neil's previous collection, Reading Between the Lines (2020), with my puffin photo on the cover, is also available from Littoral Press. I mentioned it here shortly after its publication.

The publisher, Mervyn Linford, suggests that those wishing to purchase a Littoral Press collection should email him in the first instance.

Congratulations Caroline! Your photos makes a lovely cover for the book!