Publication Pointer: The Next Big Thing

Some days ago, Juliet Wilson, known to most of us as Crafty Green Poet, invited me to take part in a blog meme called The Next Big Thing.

Juliet asked me if I would answer some set questions about an upcoming or recent publication. She also asked me to tag five more writers, the idea being that each of these would provide their answers to the same questions by the following week. They would also recommend five more writers themselves. Consequently The Next Big Thing would continue to grow and evolve.

Before I proceed to write about my chapbook, The Holy Place, I would like to add what a huge influence Juliet has been to me, as she has to so many others on the Blogosphere. Her poetry in Unthinkable Skies (Calder Wood Press) is both beautiful and challenging. Her blog posts on ethical and environmental issues continue to broaden my horizons on subjects as diverse as Scotland, light bulbs, recycling, and animals in captivity. I always enjoy reading about Juliet's bird-watching excursions and about her craft-making activities. Juliet's Haiku are plentiful and exquisite. And all this in addition to the part played by her long-eared friends, the rabbits, who will star in her forthcoming novel. Do take a moment to read Juliet's answers for The Next Big Thing: you will find them here.

And now for the questions Juliet has posed for me ...

* What is the title of your new book?
My new publication, co-authored with John Dotson from the USA, is called 'The Holy Place' after John's opening poem. 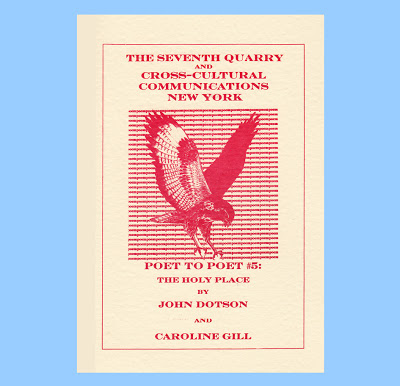 * Where did the idea for the book come from?
I was beginning to think about chapbook or pamphlet publication when Peter Thabit Jones, publisher of The Seventh Quarry Press in Swansea, invited me to share a chapbook with John in the Poet to Poet series. I had had about 100 poems published in small press magazines by that time. I had also won a few poetry prizes and had greatly enjoyed attending creative writing classes.

* What genre does your book fall under?
The Holy Place is a poetry collection.

* What actors would you choose to play the part of your characters in a movie rendition?
Now, this is a tricky question on two counts ...
However, I have often visualised the characters in my poems in the landscapes (real, conjectured or imagined) in which I have placed them. I remember my husband, David, going to see Lloyd Webber's 'Cats' on Broadway many years ago. He came back and told me all about the experience. I can just about imagine a short feline movie sequence relating to my poem, 'Monte Testaccio: Mound of Potsherds', in which my (imaginary) cats, Antony and Cleopatra, jump out of the page and on to a stage-set in Rome. I would certainly enjoy designing the pyramid backdrop. If it was to be a live show, I suppose I might consider creating an authentic aroma of Roman fish sauce. But then again, this might not be such a good idea! I wonder whether members of the feral cat colony around Monte Testaccio would come forward for audition ...


* Will your book be self published or published by an agency?
The Holy Place was published in 2012 by Peter Thabit Jones of The Seventh Quarry Press (Swansea), in conjunction with Stanley H. Barkan of Cross-Cultural Communications (New York). I had always hoped (or dreamed) that my first collection would not be a self-published volume. I felt that I needed the endorsement of a publisher as I took this initial step into the world of poetry collections. I should add, of course, that I knew Peter Thabit Jones from his excellent classes. I did not have the opportunity of meeting Stanley until Swansea's First International Poetry Festival in 2011.

* How long did it take you to write the first draft of the manuscript?
My poems had already been written by the time Peter approached me after a reading by Tino Villenueva in 5 Cwmdonkin Drive, the Dylan Thomas Birth Place in Swansea. Most of these had been published either here in the UK or in Romania or in the USA. However, it took me a surprisingly long time to select the right poems for my half of the chapbook. Gradually a sequence began to emerge, and I became pretty sure that most of my choices seemed to fit and complement the whole of my half. John and I worked pretty independently, although we were in communication by email. I met John for the first time at the 2011 festival mentioned above.

* What other books would you compare The Holy Place to within the genre?
There are two answers to this, and this is the first. The second is incorporated into my answer to the next question.

The Holy Place is the fifth in a series of commissioned poetry chapbooks. Consequently it fits with the others in the sequence. The third chapbook was by Maria Mazziotti Gillan and Aeronwy Thomas (1943-2009), daughter of Dylan. These Poet to Poet chapbooks pair a British poet with one from elsewhere. The aim of the series is 'to promote The Seventh Quarry beyond the magazine and to continue its international focus, supported by Cross-Cultural Communications, New York.'

This is the list to date of Poet to Poet chapbooks to date ...

* Who or what inspired you to write this book?
I am really only speaking for my half of the chapbook here, although it is important to point out that John and I share a love for the natural world in all its form, fluidity and diversity.

Perhaps I can address the 'who' first of all, and the first answer here has to be 'my parents'. My father, Timothy Dudley-Smith, inherited a love of poetry from his father, and took delight in sharing that love with his family. My father is well known for his hymn texts, and I feel we share something of a passion for form in its rich tapestry of guises. My mother was an advocate of our local library when we were growing up. Very early on, she took out a child's version of Homer's Odyssey. I was entranced by the story, the imagery, the characters and the adventures. Little could my mother have guessed at that point that I would go on to study and teach Classical Civilisation and Archaeology - or that I would marry an archaeologist, David, who writes the occasional poem!

I have been privileged to have studied under inspiring Creative Writing tutors over the years. It was lovely to meet up with one of these, Peter Read, over a cup of tea at the Aldeburgh Poetry Festival this November.

I will turn now to the question of 'what'. I spent much of my pre-teenage childhood in Sevenoaks, where we enjoyed the annual Three Arts Festival, with its poetry competition. Given themes were 'water', 'spring' and 'animals' - and you could say that my work continues, all these years later, to revolve around these themes that relate to aspects of the natural world. I write from the perspective of my Christian faith, and am interested in the interface of landscape and human activity. I lived in Wales for nearly 20 years, where I realised, thanks to Byron Beynon and others, just how integral the soil was to the psyche of the poets I encountered. Poems and sessions by Susan Richardson (my tutor on the Disability Arts Cymru project that resulted in 'Hidden Dragons') and Emily Hinshelwood made me realise how little I knew in terms of specifics about the fragility of the earth. I could not call myself a fully-fledged eco-poet, but perhaps I have leanings in that direction.

* What else about the book might pique a reader’s interest?

And it is now time for me to pass on the baton and introduce you to the following writer friends, in alphabetical order of surnames ...
Sadly illness and unexpected circumstances have now prevented my other writers from being able to respond in this time frame ... but I much look forward to the Next Big Thing, on Wednesday 28 November, on the blogs mentioned above.
Posted by Caroline Gill at 09:30

Thanks for joining in Caroline! I really enjoyed reading your answers and look forward to the mini film poem featuring feral cats!

Also thanks for saying such nice things about me!

Nice and interesting ideas Caroline, and thanks for nominating me. Have a great weekend...