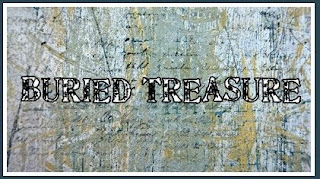 Welcome | Croeso to my Puffin Post, which I am re-posting as part of Seth Apter's Buried Treasure collaboration, in conjunction with Seth's inspirational art blog, The Altered Page. The brief was to 'excavate' an old post and give it a second life... so here goes. Enjoy! 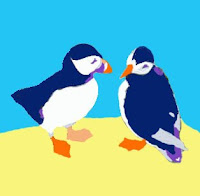 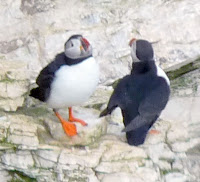 Puffins at the RSPB Reserve,
Bempton Cliffs, Yorkshire, UK
Those who follow my blog will know that puffins are probably my favourite bird. They float around in 'rafts' on the sea, looking like small jewels or beads in a necklace. They are often referred to as the 'clowns of the air' because they look so comical when they fly. I took a number of photographs, trying to capture their different poses: I hesitate to say their 'expressions' because this is a word I associate with humans. I hope you like the result!

Puffins seem to have been in the news a bit these past few months. I blogged about the rare sighting of the Tufted Puffin a couple of weeks ago.

By the way, if you enjoy exploring the natural world, you might like to hop over to my new 2010 blog, Wild and Wonderful.

hello caroline - i was astonished at the ages of the puffins!!! i had no idea!! by the way - the puffin card is really lovely!!! they've always been my favourite bird. have a peaceful day. steven

Your puffin card is lovely, really captures their character...

What a great Buried Treasure! Puffins are also my favorite bird. I live in Oregon on the West coast of the US and we have alot of puffins along the coast here.
Thanks for sharing!

Wow, wow, wow... I didn't know anything about it and you also made a wonderful card! It's so nice to find little "treasures" like this while hopping the blogs! Thanks!

I like birds, and Puffins are so unusual looking that they are attractive. I wish I could find some old paper that something to do with them and I'd have a go at something like your card - it's wonderful.

Hello Caroline! So nice to meet you. You're Puffins are very cool. I didn't even know they flew.

I think this is the first time I've ever seen a puffin. I've heard of them, but never seen one. I enjoyed the various links you shared, too. This was a great post and something very unique. Thanks for sharing.

I've never seen a real Puffin before! They're certainly adorable:) The only real connection I have with them is through the publishing company that bears there name. Lovely image you created, you reflected the photo image well!

I was going to email a reply to your lovely comment on my blog but see now I can't! opps:)

Thanks for your lovely comment, I really appreciate it and I am glad you enjoyed my nests and the poem. I havn't heared of the poet you mentioned...I will google that name!
Thanks:)

Oh my goodness. What an adorable bird. Thanks for reselecting this wonderful post. Very inspiring. I may try to draw one later!

Beautiful birds and what a great story about their age. Funny how we take things around us for granted just because they are there. Very good drawing