Above: a single Puffin in a choppy sea off Strumble Head, Pembrokeshire, Wales, UK, July 2009
We thought at first it was a castaway decoy (see below)...
... but then it dived. 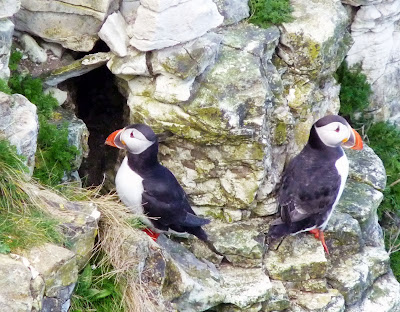 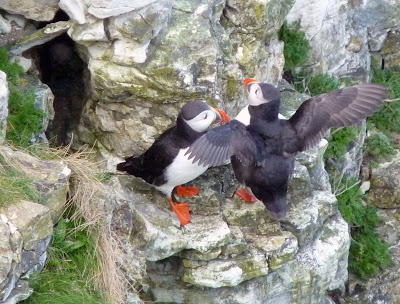 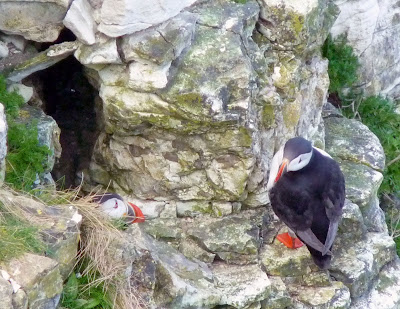 'Water, water, every where'
Coleridge

Those who follow my blog will know by now that I have a particularly soft spot for the Puffin!

The BBC has published an amazing account of the winter 'Odyssey' undertaken by this amazing bird. The findings have been made thanks to the adoption of geolocator tags. I am so grateful to Steven of The Golden Fish for drawing my attention to the report. It makes fascinating reading.

The Puffin - or rather a particularly 'snowy-looking' Puffin photographed by Barbara Fryer off Scilly - features in the February 2010 issue of the RSPB magazine, Birds. This Puffin is not an albino, but rather a leucistic specimen, since its eyes and bill have the usual pigments, and its white feathers are edged in black. Albinism (when there is no melanin present) is a genetic mutation: leucism is the result of diluted pigmentation.

The magazine also refers to the story I mentioned on a previous occasion about those silent Sirens, the supposedly alluring Puffin decoys on Ramsey Island off Pembrokeshire, Wales.

Previous Puffin posts:
*This species reminds me of the rare and declining Northern Rockhopper Penguin. I am grateful to Crafty Green Poet, Juliet Wilson, for pointing me in the direction of the RSPB's Letter to the Future campaign (don't forget to click on the green leaf on CGP's blog).

Postcript: my thanks to Matt Merritt of Polyolbion (see comments for this Polyolbion post) for teaching me a new name today. Matt told me that while the scientific name for 'Puffin is Fratercula arctica, confusingly, Puffinus puffinus is Manx Shearwater.'

PPS: On the subject of decoys and bird conservation, take a look at this!
Posted by Caroline Gill at 08:38