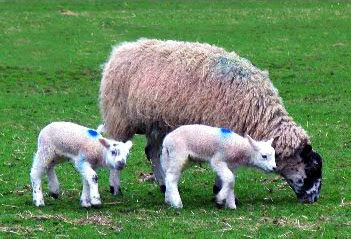 'Little Lamb, who made thee?"
William Blake
Songs of Innocence*

I came across a fascinating article in the New York Times of 25 September 1910 (a century ago - almost!) in which Mr Arthur Symone is noted for having described Blake's imagination as 'visual' and of a kind more 'natural to a painter' (which, of course, he was - as well as a poet) than to an 'imaginative writer'.

According to Symone, the painter "sees an image or metaphor as a literal reality, while the other, seeing it not less vividly but in a more purely mental way, adds a 'like' or an 'as' and the image or metaphor comes to you with its apology or attenuation and takes you less by surprise."

We all know the power of metaphor today in our writing; but are there still instances, I wonder, when a simile does the trick in a way that cannot be matched?

What poets have said:
Do take a look at this article by Tim Love, and see what you make of the given examples of metaphor and simile. The one by prize-winning poet, Alice Oswald, stands out for me.


* N.B. The Little Lamb poem by Blake includes a line of metaphor about the vales rejoicing,
presumably paraphrasing biblical metaphors such as this one from Psalm 65:13:

'The pastures are clothed with flocks;
the valleys also are covered over with corn; they shout for joy, they also sing.'