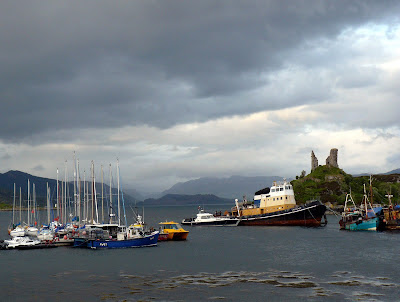 We spent hours on Skye, gazing across the lochs in the hope that we would see an otter.

The first otter we saw was made of bronze! It was the work of Laurence Broderick, and the otter in question was Gavin Maxwell's Teko. The sculpture by Kyleakin harbour was donated to the Eilean Bàn Trust for the Bright Water Visitor Centre.

We thought we caught sight of a real otter in the harbour at Kyleakin; but as you can see, the intense, atmospheric light was not at its best for otter-spotting! The 'creature' appeared and disappeared along the floating seaweed strands to the right of Caisteal Maol (Castle Moil or Moyle).

The castle probably dates from the 15th century, but the Saucy Mary version of its origin is far more compelling.

Postscript: in the course of finding out about Broderick, I came across the site on Blaven, one of the munros on Skye. It has features on the John Muir Trust and early postcards of Skye.
Posted by Caroline Gill at 12:48