'A City Waking Up' by Sue Wallace-Shaddad (Post 1: Mini-Review) 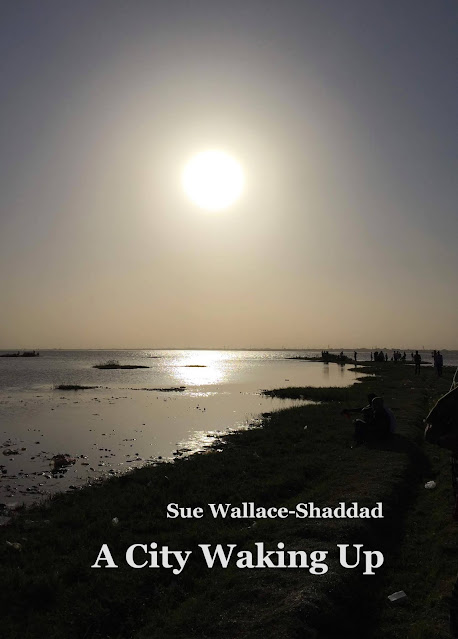 I am delighted to welcome Sue Wallace-Shaddad as my guest poet for this mini-series of posts. Sue and I both live in Suffolk and have known each other for nearly a decade. Sue is Secretary of Suffolk Poetry Society.

Following the publication of Sue’s poetry pamphlet, A Working Life, Sue had her first short collection, A City Waking Up, published last year by Dempsey & Windle. The book costs £8.00 and can be purchased here by PayPal (UK) or by contacting the poet (international and other orders).

Sue has been visiting Khartoum since the 1970s, and has recently begun to draw her poetic inspiration from the city itself. Khartoum is not only the place at which the Blue and White Nile converge; but also, as Paul Stephenson points out, the ‘Meeting Point’ (the title of Sue’s opening poem) at which so many aspects of Sudanese life, not least ‘city and countryside’, come together against a backdrop of tradition and fast-moving political change.

First impressions are important, and the glossy cover photograph, taken by the poet herself, invites the reader into this sun-baked land as day begins. Sue’s poems are often tight, and not infrequently short in length, which means that each piece has been given what I might call its own space in which to breathe. The glossary of Arabic words at the back of the book is brief and helpful. The Arabic words for food items in the poem Al fatur – Breakfast add a sense of the exotic to a piece that is almost a list poem.

Sue’s palette is a colourful one. In a few deft strokes, she conjures up cameo after cameo before the eyes of her readers; take for example her vision of Sudan in the early morning. Pastel-green houses, we discover, dot the khaki landscape, scattered like fresh mint. I am drawn to the poet’s description of pyramids of cucumber, tomatoes ready to be sold (A City Waking Up, p.10). Sue’s images are crisp and visual, but we are also invited to experience Khartoum via the senses of hearing (‘unseen ghosts screech into life’), touch (‘the desert smothers us in its sticky embrace’), smell (‘the scent of pink grapefruit lingering in the air’) and taste (‘Feta, hard squares, salt to the tongue’).

I have barely scratched the surface as I hope you may choose to encounter Sue’s poems for yourselves. I have not, for example, included comments on the narrative elements of the wedding and its feast, or on the very real sense of danger surrounding the 2019 uprising.

You can listen to Sue reading three poems from the short collection here on her Wordpress site. To whet your appetite further, Sue will answer some questions about her poems and writing practice in my next post. Please stay tuned!