Carnival Time (1): Mug Monday (his and hers, left-handers unite!)

AcornMoon and Weaver of Grass are hosting Mug Monday today. It is a chance to write about our favourite mugs. Happy Mug Monday to you all! 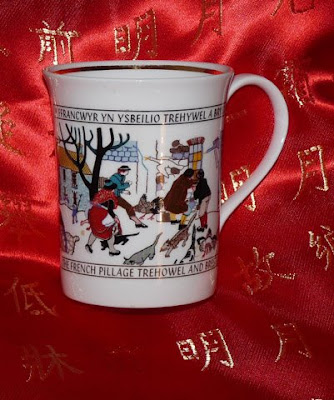 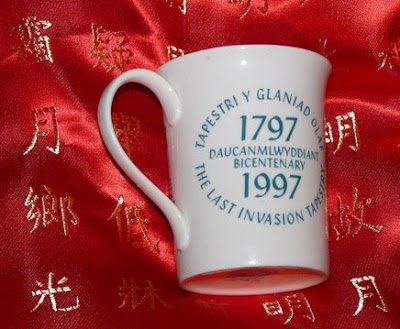 Caroline's Mug
This mug belongs to me. It is bone china, which according to some, makes the tea taster better. I like to enjoy a mug of Earl Grey, made from a pinch of loose leaves. I allow these to infuse in boiling water, and then I like to drink it while it's hot. If I am out, I will often ask for a slice of lemon in my tea; but I do not usually have this luxury at home, unless of course, we have a slice left after a meal of fish and chips. (Those who know me will know that chips are 'my one weakness' ... along with cake, curry and chocolate!).

The scene on the mug relates to the Last Invasion of Britain in 1797. The women of Fishguard made a wonderful Bayeau-style tapestry to mark the 1997 Bicentenary of the Invasion, and the mug depicts a part of their work. I particularly like the spotty dog who is careering out of the picture. The cat is rather fun, too.

The Last Invasion was staged under General Lazare Hoche, who planned to invade Ireland. 15000 men were raised to ensure that British reinforcements did not reach the area. Two mainland invasions were proposed to add to the mayhem. The first was planned for the north of England and the second was planned for the west of the UK. Ships were sent out under Commodore Castagnier. Jemima Nicholas helped to rally the Fishguard women against the attackers. She became a local heroine.

These are the words of the Vicar of St Mary's, Fishguard, written on Jemima's burial record of 1832:

'This woman was called Jemima Fawr or Jemima the Great from her heroine acts ... and being of such personal powers as to be able to overcome most men in a fight. I recollect her well. She followed the trade of a shoemaker and made me, when a little boy, several pairs of shoes." 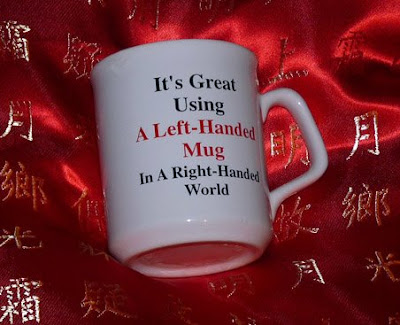 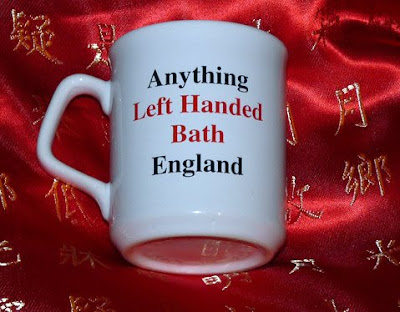 David's Mug
This mug belongs to David. Strangely we are both left-handed. It is a brilliant mug, and usually causes a wry smile in the eye of the beholder. Sadly the left-handed shop in Bath is no longer there. Perhaps I shall have to start making my own from Fimo.

It must be time to boil the kettle, but first, why not take a look at...

What an interesting selection, I enjoyed the history lesson also, I had not heard of "The Last Invasion" before.

Loved both the mugs.... especially as an artisitc LEFTHANDED person myself
but the history of the oher mug was fascinating.

Happy mug monday caroline! Your mug is very beautiful and artful! I'm intrigued with the (welsh?)inscriptions on it. It's the first time I've seen a left=handed mug too!

I am having a really great Monday morning popping around to see all the mugs. Your mugs are interestingly different! I love Earl Grey tea too, but I have bags because they are convenient for me. Loose tea would be a little more heavenly. You have included a left handed mug and so did I with my post. this is a fun thing to do on Mondays. Thank you for the visit.

Chips, cake, curry and chocolate? You're a girl after my own heart. I enjoyed your mugs. Thanks for stopping by my place, too! :^)

Linda, I tried twice to leave a comment on your wonderful posting.

Can anyone tell me how to do this when one has to log in with an ID (e.g. Google a/c, Typepad etc.)?

Very interesting. Earl Grey is a favorite of mine too. (And chocolate!)
Catherine

Good Day Caroline, and Happy Mug Monday. Your first mug is truly lovely. The scene is very neat. I can not resist Chocolate, or cake, or scones. Hugs judy

The Weaver of Grass said...

Very interesting mugs Caroline, and so pretty that first one. Love the background material too.

I too am left handed and I will look for mugs that have decoration all the way around the mug so I can enjoy it too!

YOUR mug is fantastic! I think you and I would get along famously as my weaknesses are very similar, only in a different order: chocolate,curry, cake and chips!

Lovely pix of lovely mugs! How clever about the lefthanded mugs which I'd never heard of. I do know they make scissors for lefties! I love that you chose the Chinese-themed red fabric for your background!

What a great story and the top mug is beautifully illustrated. Never thought about left handed mugs but why not...!

Love this idea and love your mugs. Since my kids got older and less likely to break them, our mugs are getting older and not so frequently replaced. In fact, I'm a bit bored of some of them. Not the one on my mugshot though.

I'm a left-handed giraffe! I find rulers the hardest thing, because one obscures the numbers while drawing the lines. I did have a left-handed ruler once and it was wonderful!

You are so right - teas do taste the best in bone china! Thanks for stopping by my blog, too.

Ahh, another left-handed, Earl Grey drinker checking in to thank your for your lovely comment, and to say how much I enjoyed your post.

I will be back to visit again.

I love your mug Caroline and the history that envelopes it is even more impressive. Sadly, I am not left handed as your other commenters, only right handed. Have a great night.

An interesting selections of mugs! Thanks for sharing and also for your kind comments on my blog!