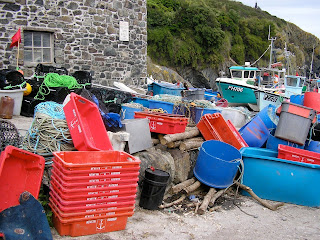 I mentioned in an earlier post that my poem 'The Ocean's Tears' had been included in Crab Lines Off The Pier, the new summer anthology from editors Ronnie Goodyer and Dawn Bauling of Indigo Dreams Publishing.

The book has just arrived, and I have much enjoyed an initial browse. Apparently there were over 600 submissions from all over the world.

As a left-hander, I tend to begin browsing from the back, and was delighted to take a trip down Memory Lane as I read Catherine Graham's evocative poem about The Hoppings on Town Moor, Newcastle. Back in 1980 during my first summer as a student, I recall the excitement surrounding the arrival of the big fair known as The Hoppings.

To switch to the other end of the country, I have much enjoyed Ronnie's beautiful and lyrical poem, 'On Crockern Tor', Dartmoor. Closer to home, 'Crabbing on the Parrog' by Tina Negus evokes those days on the beach with seaweed and muddy pools. Claire Knight's beautiful Haibun re-captures the essence of a broom-clad Cornish cliff forty years on. Gerald Hampshire prefers his crabs in Whitby, with its jet 'black silt'. Pamela Scott takes us a little further afield to Paris, while Thelma Laycock presses on for midnight in Alaska.

Do consider buying a copy to accompany you on your travels or on those 'deckchair-in-the-garden' afternoons. You can read my earlier post here; and more to the point, you can buy the book here. Thank you, Ronnie and Dawn.

And now all I need is a burst of sun!
Posted by Caroline Gill at 14:45