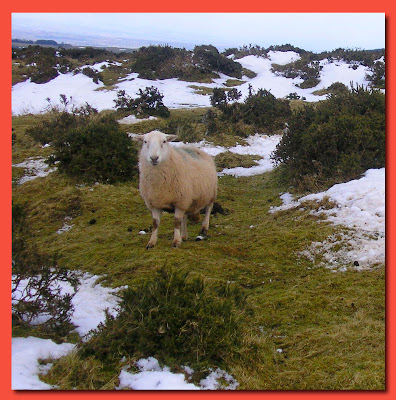 I have been greatly enjoying the festive poetry selection in the TIPS for Writers (74) 'Xmas Special' anthology, edited by Wendy Webb of Norfolk Poets and Writers.

The anthology has an all-colour cover, featuring a barge in autumn, pictures of James Knox Whittet's winning anthology, 'Fires of Memory' (of which more in a future post) and Peter Smith's collection, 'Poems for Peter'. It also shows the cover of the 'Live Canon Emerging Poets Anthology 2009': my renewed congratulations to Wendy for taking the second prize in this esteemed competition.

Subjects in the anthology range from traditional Christmas themes (hence my sheep photo, in case you were wondering, to complement the Haiku by Jean Cooper on p.12), with 'Mary's Song' by prolific small press supporter, Joan Sheridan Smith (p.26), to 'Ye Olde Yorkshire Pudding' by Bernard M. Jackson (p.17).

Forms are wide-ranging, and include free verse (if this statement is not a contradiction in terms!), for example 'The Night Before...' by Alison Chisholm on p.31. I spotted examples of Tanka, Haiku (including a link to Claire Knight's poem* that won First Prize in the Haiku Section of the New Zealand Poetry Society Competition 2009) and Cinquain. Sonnet forms include Wendy's invented form, the Brentor Sonnet, 'Wishful Thinking' by Peter Davies; and my poem, 'Poltesco', in the Cornish Sonnet form. Dr Marc Latham's poem, 'Hiking Hadrian's Wall at Summer's End' is a colourful ('cerulean', 'green', 'gold[en]', 'yellow', 'emerald' and 'blue') Folding Mirror Poem, a form invented by Marc.

I am delighted with this anthology: thank you, Wendy, for another great publication.

* One of Claire's Haiku features in the 2010 Snapshot Press Haiku Calendar. My copy arrived today: you can order one here.
Posted by Caroline Gill at 18:56

good to find poetry reading you enjoy. that sheep on hay bluff, great. hope all is well.

caroline i love the photograph of the sheep up on hay bluff. its eyes are kind looking. have a peaceful day. steven

that's a wonderful photo! The sheep looks so serene... it sounds like a great anthology too

Thanks for the mention Caroline and glad to hear you've been enjoying a poetic holiday season.