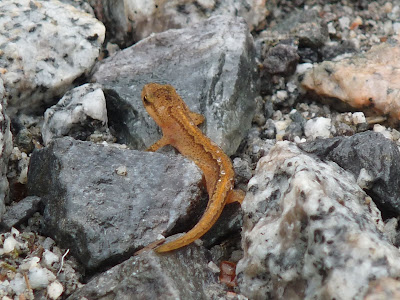 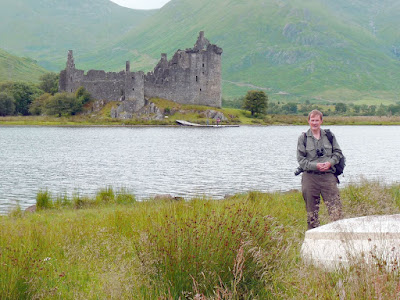 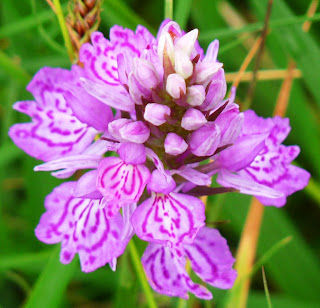 Kilchurn Castle on Loch Awe, Scotland
We drove past this wonderful loch-side castle en route for the isle of Skye last year. It was one of our regrets that we did not have time to stop, so this year we made a point of including Kilchurn on our Scottish itinerary. The castle was built by Sir Colin Campbell in the middle years of the 15th century. Recent research into masons' marks indicates that some of the masons who worked on Rosslyn Chapel may have moved on to exercise their skills at Kilchurn.

It was rather dull weather when we there, but I found some colourful views on Google Images.

The orchids were truly amazing in their beauty and abundance. I recall my school days in Kent when it was considered a red-letter day if we spotted an orchid in the wild. However, my excitement at seeing these flowers was surpassed on this occasion by the delight at finding and photographing the small lizard. I have occasionally seen lizards in the wild (we once found one in our back garden before we moved to our present house), but this lizard was so colourful. I have looked on the internet, and it may just be a Common Lizard; but its markings seem a little unusual. I kept coming across the Red Eft on the web, but I have a hunch that this was a lizard and not a young newt.

STOP PRESS: My thanks to Chris, the Co-ordinator of the Sand Lizard Captive Breeding Programme and Administrator of RAUK (www.herpetofauna.co.uk) for telling me that my

'first assumption of a Red Eft is closest. It is, in fact, a juvenile newt.'

The fact that the pale stripe down the back continues to the tail apparently suggests that the creature is a juvenile Palmate Newt.

hello caroline, that's so cool! the variety of animal life that exists in the most unlikely places. the variety of colourings and textures of that animal life is so astonishing. i'll be back later after you've had your snack!! steven

what an adorable lizard! And such a beautiful portrait you took!

The orchids are havign a great year this year...

Thanks for the link, Caroline! I don't think I've seen a newt before. We have quite a few lizards all across the compound and also skinks.

The Scottish scene is beautiful! And so is the orchid.

Have a great weekend!