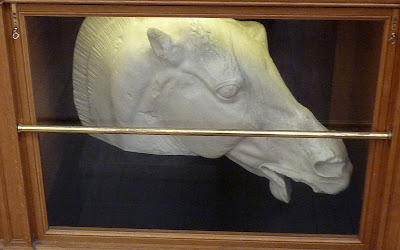 'a perfect example of what the highest genius will do,
when curbed and guided by science.'

David (Gill) and I have just been told that our joint piece, HMS Belvidera and the Temple of Minerva, was published on 20 April 2010 via the Oxford University Press 'Notes and Queries Advance Access' scheme.

You can login via Athens if you are part of an academic community. The print journal is due out in June, and will be available to all. We consider the iconographical details on a marble book, and link these to HMS Belvidera and the Parthenon around 1832, when King Otto was crowned ruler of Greece.

what a gorgeous cast of 'Horse of Selene'. and congrats on your joint publication with David. any relation to you? have a great night.

Yes, Naquillity, David is my better half! It's the second time we have co-authored a piece. The horse is beautiful: it supposedly helped to draw the chariot of the Moon.