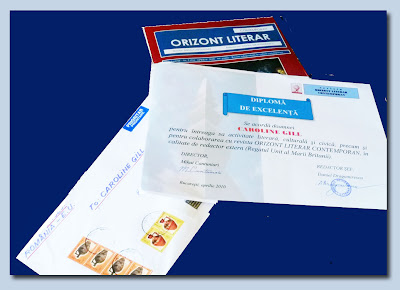 I have just received the latest copy of Contemporan Orizont Literar | Contemporary Horizon Magazine from Bucharest, Romania. This special issue, 'Anul III, Number 2 (16)', is packed with cultural delights from Nigeria ('Nigerian Perspectives' by Biola Olatunde on p.36) to Sri Lanka (poems by Sayumi Yokou on p.58) and Uruguay ('Belonging', on life as a student at Montevideo on p.59) by Marcela Meirelles.

This is a special edition because...

1) it marks the second anniversary of the magazine in its current format. It was founded a year ago in May 2008 by Mihai Cantuniari, with Daniel Dragomirescu as Editor-in-Chief. I first came across the magazine on the American site for writers, 'The Red Room', having read about the magazine in a blog-post by contributor, Peggy Landsman. Since then I have submitted a batch of my poems, which were published bilingually in English and Romanian, thanks to the translating skills of Professor Lidia Vianu's students at the University of Bucharest. I have also set up a series of interviews from Wales, my 'Dialoguri Galezi', in which I interview poets and other writers about their work.

2) it coincides with the official launch in Bucharest of the magazine's new 'Contemporary Horizon Multicultural Foundation'. This is an exciting time as the magazine takes off and becomes more widely read all over the world. I have been very stimulated by the international exchange of culture, literature, art, ideas and news. You can imagine how thrilled I was to receive the certificate, posted above!

The special issue opens with a 'flashback' or résumé of what has happened in the last year. Daniel Dragomirescu ('From Creative Localism to Multiculturalism' p.4) charts the developments of the new magazine, and explains how it was initially conceived as a sequel to the Vaslui Literary Truth magazine | Adevărul literar din Vaslui.

Contemporan Orizont Literar | Contemporary Horizon Magazine has come along way in the last two years. Since April 2009 the magazine has become an independent, bilingual and multicultural magazine. I interviewed Swansea poet, Byron Beynon, in one of my 'Dialoguri Galezi' slots; and the poem he supplied to accompany his answers was printed not only in Romanian (thanks to the input of Professor Lidia Vianu and her students enrolled on her Masters course on the Translation of the Literary Text) and English, but also in the Welsh language. The magazine had been partially bilingual up to and including issue no.3 in July 2009, but now all features appear in Romanian and English. Alina-Olimpia Miron, one of the main translators, has now taken on the role of General Editorial Secretary. I am personally indebted to Alina for her translation work.

You need only to click on the Contemporary Horizon link to see from the representative flags just how many corners of the world have already been touched by the electronic versions of magazine features. Many contacts have been made via the internet in this way.

The current issue is packed with the following ('in no particular order'):
... and a great deal more besides. The magazine has a coloured cover. There are black and white photographs and illustrations throughout.

Do consider taking out a subscription by PayPal (details here). You can read more about the magazine here and here - and you can always leave a comment on the Contemporary Horizon site, if you feel you would like to make a response.

On a personal note...

... I would like to end this round-up with words of very sincere thanks to my friends in Romania. I would like to express my personal gratitude to you all. Thank you, Daniel and Alina, in particular, for your friendship and opportunities for collaboration over the last year or so. It has meant a great deal to me. Thank you, too, for the splendid certificate. I wish you well and look forward to further cultural collaborations in the days ahead.