Puffin Quest (5): THANK YOU to all who voted! 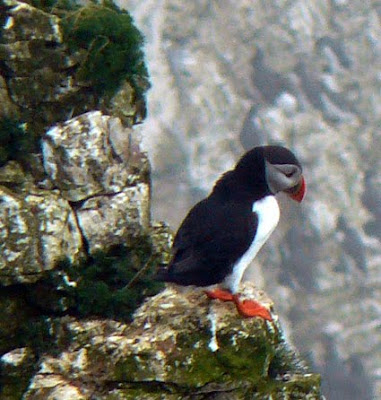 It's those puffins again!
My sincere thanks to all who voted for my puffin poem, 'A Chink in the Sky' in the Writelink Spring Fever poetry competition. I am pleased to report that it made the 'grade for publication' in the anthology in the judge's eyes by the skin of its teeth (or should that be by the tip of its bill?).

'A Chink in the Sky' came in at number 10 in judge, Magdalena Ball's shortlist.

If my poem had been number 11, all your votes would in fact have saved my puffins from 'near-extinction' (as the final publication list comprised the judge's Top 10 poems plus the 10 poems with the most votes) - so thank you very much for your support.*

The poem will be published in the Writelink Spring Fever anthology in due course.


* Many of you will know that puffins are in the Amber category on the RSPB 'conservation' list...
Posted by Caroline Gill at 22:03

Oh, I see! The first ten poems will be published! That's great, Caroline. It was surely MY favorite.

this is great news. congratulations. your puffins will be proud, :)

in my reader i see that there will be a nature writing course. but it's not showing up on your blog. i think it's a great endeavor. everyone will get to explore nature and write. my two favorite things. have a great day.

Congratulations Caroline, well deserved, and glad my vote was useful.