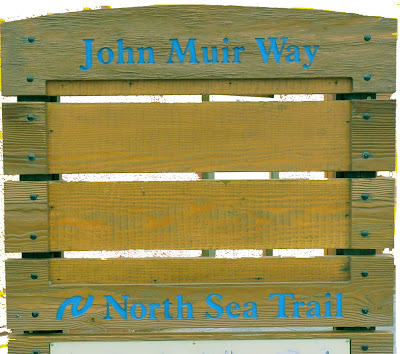 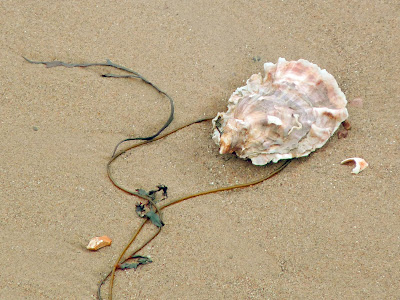 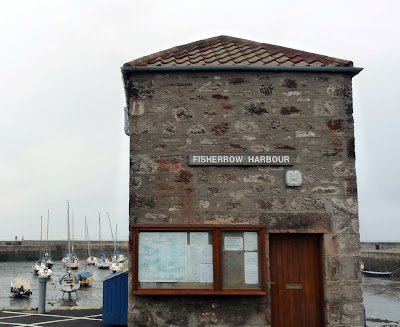 One of our first ports of call on our recent Scottish expedition was the little harbour of Fisherrow - with its wonderfully evocative name - on the outskirts of Musselburgh, on the way to Longniddry. Fisherrow marks the western end of the coastal path on the John Muir Way in East Lothian. Fisherrow, on the mouth of the river Esk, is a wonderful place for oystercatchers: we enjoyed listening to their hauntingly beautiful call (mingled with that of the curlew) as we looked out across an atmospheric grey seascape. In days gone by the Fisherrow fishwives were renowned for their blue and white striped dresses and their wicker creels. In 1791 there were 90 of them in this small community. Many of these women were married to fishermen, who would have been away, up and down the east coast, fishing for weeks or months at a time. The women consequently were capable and independent. Some of them played golf, and this is certainly a rich stretch of coast for golf courses.

My reasons for visiting Fisherrow were two-fold. Not only did I want to visit the area where relations of mine played golf many years ago, but I particularly wanted to see the John Muir Way, named after the 'Scottish father' of ecological conservation. The notice board above had another board nailed to it (see off-white board at base of board photo above). I didn't like to post a photograph of it because it contained poems, which are almost certainly in the copyright of the authors. However, it was a brilliant board, decorated with pictures of an oystercatcher (of course), mussels, crab, gulls and herring. The poetry and artwork were created by pupils at Campie Primary School in Musselburgh. I applaud their ingenuity, and particularly liked a short poem called 'On being a Mussel': perish the thought!

Did you know that Muir has a glacier named after him in Alaska? Muir was born in Dunbar, and emigrated with his family to a farm in Winsconsin at the age of eleven. The Yosemite and Sequoia National Parks owe their existence in large part to this far-sighted man. Scotland's John Muir Country Park was set up in 1976.

At some point soon I hope to do a blog post on the Orcadian poet, Edwin Muir.

Looks to be a nice place. I love that second picture. Personally though I can't golf. The most I've done is putt putt golfing.

I too love the second photo! I also love oystercatchers,