We had a snowy train journey to London on Saturday to visit the Invisible Architecture Installation in The Roundhouse, Camden, curated by Antlers Press as a celebration of World Poetry Day. This was our first visit to this extraordinary venue. The building itself is well worth exploring.

The Roundhouse, a Grade II* listed building and registered charity in Chalk Farm, dates from 1846, when it was constructed as a steam-engine repair shed, complete with turntable. Grade II* buildings are particularly important buildings of more than special interest. 5.5% of all listed buildings in Britain have this rating attached to them. Some ten years later, the Roundhouse became a production warehouse for Gilbey's Gin. It fell out of use before World War II.

The playwright, Arnold Wesker, and his Centre 42 Theatre Company made the Roundhouse their base for part of the 1960s. The venue closed in 1983. Its next chapter began in 1996 when Sir Torquil Norman of the Norman Trust bought the it and began to introduce a programme of artistic events once more. After a further closure, a period of overhaul took place in 2004, under the auspices of architects John McAslan + Partners. 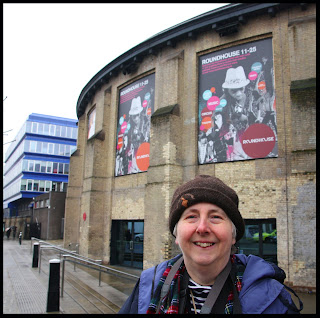 These days the Roundhouse, with its slate roof and cast and wrought iron supports, is known as a legendary venue for artists and their followers. It has been described as 'the crown jewel of Camden’s performing arts scene'. The venue has hosted music festivals, theatre, circus, installations, the BBC Electric Proms and the Royal Shakespeare Company’s Histories. Artists such as of Jimi Hendrix, Paul McCartney and The Who have performed here.

According to Marcus Davey, chief executive and artistic director of the Roundhouse, young people are at the heart of everything that happens. The Roundhouse offers a year-round schedule of creative projects for 11–25 year olds in 24 state-of-the-art studios, where facilities include TV, radio and music production, media suites and rehearsal rooms for music and performance. It was announced last October that the Roundhouse Studios had been given a £5 million donation by the Paul Hamlyn Foundation, named after the publisher and philanthropist.

If you find yourself in the Chalk Farm and Camden area of London, do look out for this venue. It was good to find a display of literature about English PEN. My next post (click here) will feature the Invisible Architecture Installation project.
Posted by Caroline Gill at 12:50