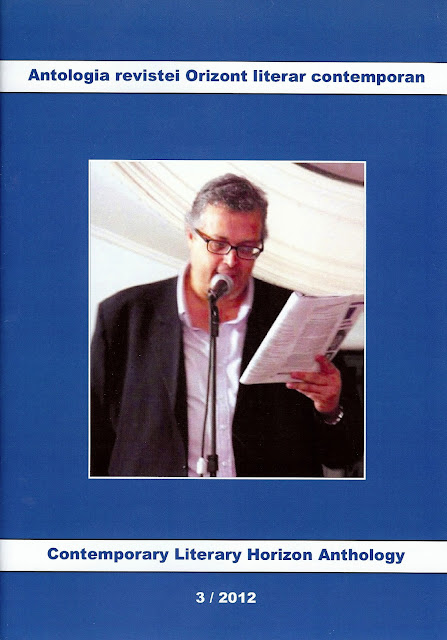 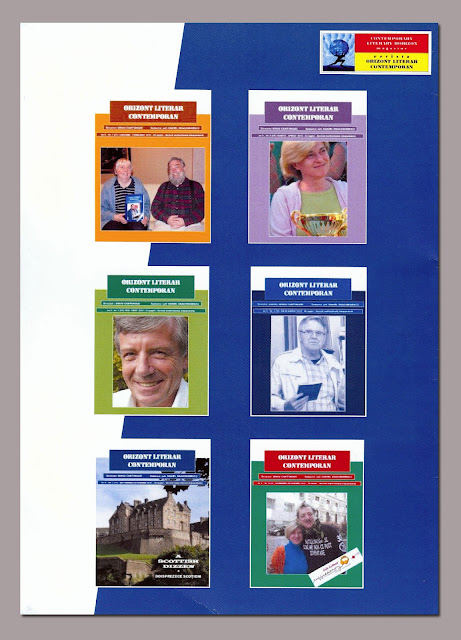 I was delighted to receive my copies of the latest Orizont Literar Contemporan Antologia from Romania. The cover photo shows Vogaluz Miranda from Brazil. You might recognise a certain someone with Professor Don Riggs (we met in Philadelphia, USA) in the orange cover on the back. This international literary Antologia is over 80 pages long and edited in Romania by Daniel Dragomirescu. The magazine's strapline, 'All the world in a journal', is well illustrated by a patchwork photo inside the back cover of some 56 international contributors.

The anthology includes contributions in Romanian ('Un fel de-a fi Numai al Lor' by Mihai Cantuniari, Honorary Director of the journal, on p.40), in Italian ('Lucciole' by Ettore Fobo inside the front cover), in English ('Jumping In' by Katherine Gallagher on p.3), in Spanish ('El Tiempo' by Juana Castillo Escobar on p.20) - and also in German ('Basisdemokratie Besitzt Keine Basis' by Raymond Walden on p.70).

If that doesn't sound sufficiently international for you, there are also contributions from Neil Leadbeater in Scotland (whose feature on the Scottish Dizzen was so well received back in the September-October 2012 issue of the magazine), from Burt Rashbaum in the USA, from Lena Vanelslander in Belgium, from Katerina Kostaki from Greece - and from Ingrid Odgers Toloza from Chile ... to mention a few more.

The Antologia contains a good number of poems, such as 'Take My Hand' by Anne Stewart, which begins,

I'll take you to an island, any
Greek island town with winding
uphill paths ...

and has been translated into Romanian,


Prose pieces include 'My Childhood and My Father', a touching family memoir from Mira Faraday in the USA; and, in a very different vein, an essay entitled 'Labor, Slavery, Exploitation and the Limits of Aid', a contribution based around the influence of Simone Veil, a Christian mystic who lived outside the (Roman Catholic) church.

If you would like to know more about Orizont Literar Contemporan and the ever-growing international family of literature aficionados it represents, do take a look at the website here. The Antologia also includes two of my poems, '1st May: Red Kite at Strata Florida' from my new poetry chapbook, The Holy Place, co-authored with John Dotson (details here) - and a short anti-slavery poem, 'Trade Winds'.

Thank you to Daniel and the team for yet another truly cosmopolitan publication!
Posted by Caroline Gill at 14:08

Hallo Caroline, it's good to meet a fellow contributor. I enjoyed your poems in the Contemporary Literary Horizon Anthology! (I wrote the essay on Kazimiera Illakowiczowna) All best, Morelle