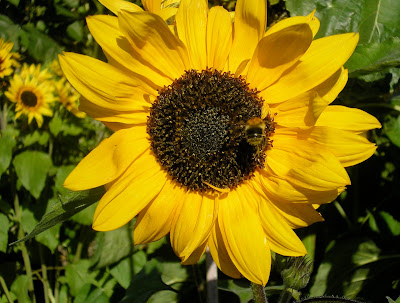 You can enjoy the vibrant 'buzz'

of Van Gogh's famous Sunflowers
here
I was delighted to receive the current copy of Contemporan Orizont Literar (Annul III - Nr.4 (18) / JULY-AUGUST 2010) through the post from Bucharest. Mihai Cantuniari is Director of this international and largely multi-lingual publishing enterprise, with Daniel Dragomirescu as Editor-in-Chief. The magazine's new Foundation is a media partner of MTTLC, which comes under the guidance of Professor Lidia Vianu at the University of Bucharest.

GOOD NEWS! ... Members of the magazine's editorial and production team have secured a national headquarters in Bucharest. The new Foundation is now on track. Daniel and his colleagues have persevered to ensure that the magazine goes from strength to strength, rising to new heights and inspiring readers (and writers) from all corners of the globe. I am not alone in acknowledging a debt to the editor's cultural foresight. 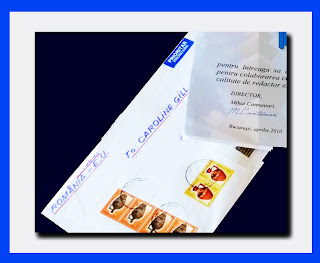 A package from Romania!


The arresting and penetrating eyes of Van Gogh, in his self portrait 'without beard', adorn the front cover of this issue. I cannot help feeling that the portrait complements the poem on p.16, After Kirchway after Keats by Professor Donald Riggs of Drexel University, Philadelphia, USA. I have no idea whether the painter's depressive and suicidal traits were manifested in a previous generation, but I find myself substituting 'brother' for 'sister'* in Van Gogh's case. The poem poses - as perhaps all good poems should - more questions than it attempts to answer, concerning our genetic and social make-up as individuals. I found myself reconsidering the old chestnut of whether art arises in its most potent form out of suffering - or whether suffering is just one of many valid catalysts for creativity.
This fine poem by Riggs is, of course, not about Van Gogh but about Keats. A picture of the poet lodged itself in my head back in 1985, when I lived in Rome, and paid my first visit to the Protestant Cemetery by Piramide (named after the eye-catching Pyramid of Cestius), to see those paradoxically ethereal and immortal words of epitaph etched in stone. Since then my vision has mutated somewhat, and it would be fair to say that the Keats of Bright Star is probably the dominating picture today - such is the power of story, reconstruction and (perhaps especially) the moving image.

Curiously, this issue has more of Keats on p.50. Swansea poet, Byron Beynon, evokes the interior of the Keats-Shelley House at 26 Piazza di Spagna, in his poem, The Spanish Steps, Rome. The poem includes the chilling line, 'death entered at eleven o'clock'.

Speaking of Wales, you will find my interview with Cardiff eco-poet, Susan Richardson (and here), on p.4 - along with Susan's polar poem, Waiting at the Breathing Hole, about life above and below the ice, in which the speaker waits expectantly for 'the whiskered nose of inspiration'. The poem is from Susan's acclaimed poetry collection, Creatures of the Intertidal Zone, published by Cinnamon Press. Thank you, Susan, for your detailed answers to my snow-shower of questions! Incidentally, you can read about Susan's recent visit to Keats' House in Hampstead, UK here.

This edition contains 60 packed, illustrated and well presented pages of:
Thank you once again, Daniel, for the opportunities that have arisen - opportunities to make new friends, to gain fresh perspectives on the multi-faceted world of the Arts, and to learn more about Romania itself.

This edition is truly 'international' in outlook. The following countries are represented by those who have contributed:
... and Wales, including a page of Lyrical Horizon | Orizonturi Lirice poems by Chris Kinsey. I interviewed Chris, BBC Wildlife Poet of the Year 2008, in an earlier edition in my occasional column, Dialoguri Galeze.

Do take a look at the magazine site here. New subscribers are always welcome.
* A letter from Keats to his sister, Fanny
Posted by Caroline Gill at 12:01