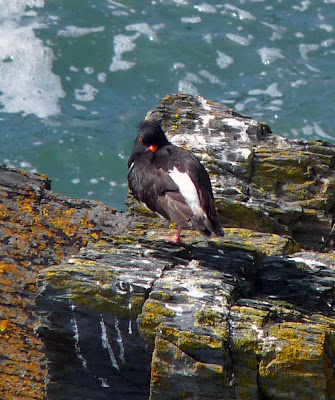 ?Black Guillemot off the Welsh Coast

I would love to have an identification confirmed for this pigeon-sized bird which I saw on the Cardiganshire coast cliffs last Saturday. The red feet and white side suggest a black guillemot (in summer plumage) to me; but I am puzzled by the red around the bill, unless the bird had its bill open when I clicked the shutter. Any thoughts gratefully received!

P.S. My thanks to Richard for the identification of an Oystercatcher! The bird has its bill tucked in its wing, apparently, which is why I was thrown off course in my attempts at making an identification.
Posted by Caroline Gill at 22:32

That bird looks to be very comfortable on those rocks. It's a beautiful bird.