Of Poems and Puffins 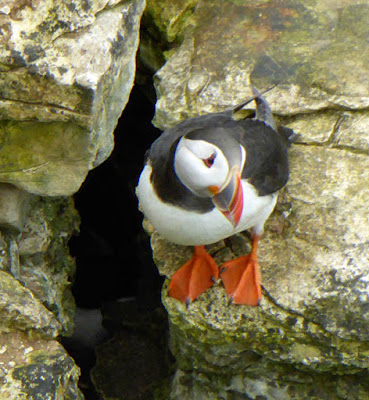 Puffins have been in the media recently, featuring in Adam Nicolson's BBC4 series, The Last Seabird Summer? There has also been some delightful footage on Wales, Land of the Wild (also BBC) of Puffins breeding on Skomer, a small island off the Pembrokeshire coast.

I had a Puffin poem published recently in #186 of Orbis (and was delighted to find it had received an Honourable mention in editor Carole Baldock's Readers' Awards). My poem, with an epigraph from The Birds by Aristophanes, a comedy about the original Cloudcuckooland, was prompted by a session I attended at the Norfolk Festival of Nature back in 2015, at which Mark Cocker and Margaret Atwood shared with the audience their concern over the nature words that had been dropped from the Oxford Junior Dictionary. My poem does not follow these words, or indeed the ones that feature in The Lost Words by Robert Macfarlane, but I wanted to explore the plight of our threatened sea-birds.

Those who live within reach of Snape Maltings in Suffolk may be interested to know that there is an exhibition, 'The Lost Words - Forget me not', at The Lettering Arts Centre until 26th May.

And, speaking of Suffolk, do buy a ticket and come and enjoy the 6th Festival of Suffolk Poetry in Stowmarket on Saturday 11th May.